La residencia (or The House That Screamed): Quasi-Lesbian Fascist Hijinks

This entry comes to you courtesy of Final Girl's December Film Club. Viva Ponder! Spoilers for the whole movie.

Yesterday I was given the opportunity to watch La residencia, a slice of late-60s Spanish-produced horror that has exerted considerable influence on the genre despite its cult status. The film is excellent, calling on antecedents from earlier in the decade such as The Innocents and Psycho; it is a delicate (if not soapier) depiction of the madness that germinates in isolated, sexually repressed minds. Its brutality is minimal but perversely poetic, and although its unconventional structure owes a debt to Hitchcock's earlier masterpiece, writer-director Narciso Ibanez Serrador's invocation of Fascist imagery and methodology gives his work a critical charge all its own. Produced and released during the twilight hours of Francisco Franco's dictatorship, Serrador's flirtation with strategically deployed nipples and incestuous kissing speaks to the crumbling of Spain's heavy cultural censorship, a product of an authoritarian environment quite like La residencia's titular boarding school. The moral is universal, though: save for its noticeably vintage fashions, La residencia is atemporal, and thanks to its spirited English dub and multicultural cast, the movie, although it takes place in France, could ostensibly be staged anywhere.

La residencia has no real protagonist, especially not after the unexpected death of fake final girl Teresa an hour in, but it does have an inarguable central figure in headmistress Madame Fourneau. Fourneau runs her 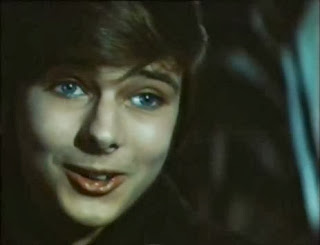 boarding school, an institute for difficult or unwanted young women, with an iron fist. For 300 francs a term, Fourneau submits the girls to a rigorous curriculum of writing, speech, art, gardening, music, and the like. They are guided through the halls from class to class in two straight, silent lines, as if marching. Insubordination is mercilessly punished. Early in the film, the defiant Catherine refuses to do her writing, an act for which she is secluded for a day and, after refusing to apologize, stripped and savagely whipped by three of Fourneau's most trusted students. Fourneau views her discipline as a necessary evil, telling Catherine that her rebellion "made her" issue the whipping, and after the deed she instructs her particularly heinous flunkie Irene to say her prayers as a means of reflecting on what she's done. They are insignificant gestures, of course, feints contrived by Fourneau to turn a blind eye to the atrocities she inflicts upon these girls. They indicate a greater decrepitude spreading through the school that Fourneau is actually powerless to stop: three students have disappeared in mere months, Irene is covertly abusing her power to bully and control the other girls, and Fourneau's own son Louis is a habitual voyeur in a building packed to the rafters with sex-starved teenagers.

The latter issue, as it turns out, is not only Fourneau's greatest vexation but the source of her most severe problems. The boarding school is already a hothouse for desperate feminine libido, so much so that the girls draw lots to see who gets to fuck the homely woodman when he arrives at the school for his weekly delivery. There's an exceptional scene halfway into the film where one steals away for a rendezvous during a sewing lesson, her giggling and coital moans intercut with shots of needles being threaded and lips being bitten. Fourneau, of course, wants her precious Louis to steer clear of these lustful young transgressors, keeping him separated from them and telling him that he'll soon have a chance to meet a "nice girl, just like your mother" once he leaves the school. The bad-touch element is impossible to miss, especially when she plants a kiss on his lips that sears the frame into a white dissolve. This, of course, explodes in her face when she discovers that Louis has been killing these missing girls and collecting their body parts to make a woman for himself in the perfect image of his mother.

Sexual neurosis hangs heavy on every major character in La residencia. Madame Fourneau, the consummate Christian reformist, is a portrait of unrealized sexuality. The tender kiss she plants on Catherine's bloodied back after her whipping, paired with the uneasy standoff she has with her after she strips nude in the shower, speak to latent lesbian desires that manifest themselves in cruel authoritarianism. There is also, of course, her stringent dictation of Louis' sexual habits, a delusional assumption that she can control the post-pubertal wiles of a sixteen-year-old boy by forbidding him to look at or even think of the girls. Irene fulfills herself and her urges by observing this model, though quite more overtly; she plays unabashed control games with the other students, dictating the frequency with which they are allowed to see the woodman while caressing their hands and reminding them regularly of her power. The most menacing flex of this power is when she forces Teresa, as a punishment for meeting in secret with Louis, to dress up in her prostitute mother's clothing and sing as she might at a cabaret. (This incident causes Teresa to attempt an escape, during which she is killed by Louis.) And naturally, there is Louis himself, who is able to cut up these girls time and again as his mother desperately tries to stop them from "escaping." Her efforts to repress the girls by changing the locks and boarding up the windows, ironically, make it all the easier for him to fulfill his warped fantasy. Sexuality in the boarding school is a cyclical game: buttoned-up Madame Fourneau imposes authoritarian rule on the girls, a philosophy that Irene channels into sadomasochistic perversion, which ultimately drives at least one girl into Louis' grasp. It is no wonder that when Louis kills Irene, the heir apparent to Fourneau's style of psychosexual dominance, he takes her hands because they are "slim but strong" like his mother's. The regime thus devours itself, demonstrating that, in the words of Thomas Sipos, "authoritarianism carries the seeds of its own destruction, in the end destroying even those who serve it." More specifically, it seems to posit sexual repression as both a tool of and a conduit for cruel dictatorship, as the denial of sexual agency by an authority figure generates exactly the kind of imbalanced power relationship that movements like Fascism take psychological root in. Between this thoughtful, robust premise and the film's many other virtues (kills that are stunning for the genre even today and that must have been sensational in 1969; Lilli Palmer's magnificent performance as Fourneau), La residencia is an underseen horror classic, one I am thankful to have been introduced to.
Posted by Drew at 2:39 PM