I was really busy this week and I only wrote four entries instead of the typical five. I'm sure you are all beside yourselves about it. If you're curious, the omitted film was World War Z, which is probably my favorite blockbuster of the year. Who would have thought?

All the Boys Love Mandy Lane

All the Boys Love Mandy Lane will probably be remembered more for its nightmarish release history than its content, a seven-year cautionary tale that catches Bob Weinstein in one of his more tone-deaf moments. Unshackled from the horror trends of 2006, a year glutted with remakes, sequels, and cheap torture flicks, Mandy Lane was cursed with a negative box office prognosis and bounced from studio to studio until the Weinsteins inexplicably purchased it again in 2013. That the film went on to double its budget in a limited international release may be a result of this sensationalized hype, but wouldn't it be nice if we could shelve the drama and give credit where credit is due? Mandy Lane, directed by the same Jonathan Levine behind this year's Warm Bodies, is a stylish and intelligent teen slasher sensibly rooted in the insecurities of its youthful cast. Mandy Lane (Amber Heard, better here than ever) is a stunning high schooler routinely hounded by boys, one of whom dies trying to impress her. Her enigmatic charm tarnished, she becomes something of a recluse, breaking out of her shell only long enough to attend a remote countryside party with a few acquaintances. As horror dictates, most of these teenagers are raging assholes, but Mandy Lane is sensitive enough not to fully place the blame on them. Their maladaptive behavior is instead shown as an extension of their self-hatred, manifested through body image issues and challenged masculinity; the film at large is a treatise on the corruptive influence of sexuality, and how complex the lives of the young grow when conscious attraction is introduced to them. Levine's emphasis on failed flirtation and body-shaming creates an embarrassed, uncomfortable atmosphere, one that the film only escapes during the moments where the gang forgets their sexual agendas and just has fun. The script is pitched a bit feverishly so as to facilitate the horror elements, which has led to reviews decrying its generic nature, most of them ignorant of the fact that this is a genre film and thus created in service of the aforementioned elements. It would be a different story if the ideas were stale (which they're not, as few teen horrors have such capably explored empathy for their victims) or if the execution was botched (which it wasn't - the movie looks gorgeous and the kills are solid). In their defense, Mandy Lane's greatest failing is that it can't fully reconcile the medium and the message, most noticeable in its clever but wobbly ending. Levine more than acquits himself with excellent craftsmanship, a talented cast, and the best damn soundtrack I've heard from the genre in years. Where else are you going to get a spread like Peaches, Beethoven, "Sister Golden Hair," and this lovely Bobby Vinton cut? Cool in 2006, cool in 2013. B+ 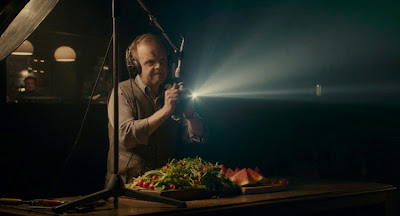 Since horror is so dependent on culturally recursive imagery, often scaring us with things that we know we'll be scared of, it proves itself a fertile ground for namechecking, parody, and homage. None of these intrigue me more than the giallo homage. Despite the fact that Italy's wackiest subgenre is characterized by arrhythmic narrative structure, unpredictable editing, and shot after non-sequitur shot, films attempting to pay their dues to such a singular cinematic phenomenon often employ these techniques too academically. Berberian Sound Studio, arriving three years after staid but enjoyable Amer or Dario Argento's God-awful Giallo, mostly manages to avoid this. Toby Jones plays a sensitive introvert who, having only designed sound for nature documentaries, finds that his new overseas gig producing gory sound effects for an Italian horror movie exacts a high emotional and mental toll. This movie has no aspirations toward true giallodom, instead borrowing giallo's delightfully squishy sound design (what do you think that produce is for?) and baroque low-key lighting to grant style to a mostly conventional narrative. Berberian Sound Studio is a far cry from generic shock horror, though, instead a sinister character piece as portrayed masterfully by Jones and facilitated through a series of increasingly oppressive interpersonal encounters. The problems set in during the final fifteen minutes, when the house of cards finally collapses and our protagonist finds himself in a set of alien circumstances that do little to illuminate what we've already seen of him. Far from the Berberian Sound Studio that wet its hands playing in the blood of giallos past, the ending swings wide and fails both in the typical and atypical realms the rest of the movie bounces between. It has its own intrigue if you're into random things (see also The Lords of Salem), but thrust like a knife into a carefully written screenplay, it makes sadly little sense. B