Prometheus: In Space, No One Can Hear You Struggle to Resolve Plot Points

This review contains minor spoilers pertaining to the origins of the Aliens and a couple of set pieces. Nothing too drastic. 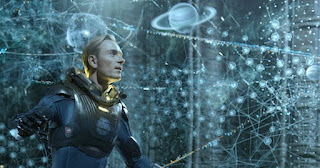 Prometheus is a beautiful movie. It truly is. In a cinematic climate where studios pump obscene amounts of money into visually interchangeable blockbusters, the achievements of Ridley Scott and a visual effects crew over 200 strong deserve all of the recognition they've been earning. Its use of 3D, unique and commanding but not in a way that draws attention to itself, is exceptional; the colors and lines are controlled, attractive; the camera work, barring a few confusingly staged set pieces, clear. Maybe those gnarly Giger edges are starting to show their age after three decades, but as one small star in this film's dazzling constellation of frigid light and alien terrain and sleek futuristic technology, they fulfill a much grander aesthetic purpose.

Purpose is a funny word to use in conjunction with Prometheus, though. Despite the wealth of attention paid to its appearance, the movie comes up lacking when you attempt to justify its existence in any other way. The visuals are a product of love and care and tremendous scrutiny, and the script is a first draft that Damon Lindelof and Jon Spaihts excreted because their executive producers were probably breathing down their necks, begging them to get it done so the rest of the staff could actually work.

The first and most grievous casualty to such sloppy writing is the film's ideology, which often damns a film of this genre right off the bat if handled improperly. Prometheus organizes itself around the clash between faith and science, which is not the most original thematic fallback in the science fiction canon, but one that reliably proves itself interesting with the right treatment. In God's corner we have Noomi Rapace's esteemed scientist Elizabeth Shaw, whose findings early in the film allow her to reconcile her scientific prowess with her belief in a higher creationist power. Batting for the secular team is Charlie Holloway, played by Logan Marshall-Green in typical cranky atheist fashion, rough around the edges and quick to receive Shaw's claims with a supposedly subtle patina of disbelief. Exchanges between these characters are typical, but even this doesn't have to be a problem if the execution is noteworthy. 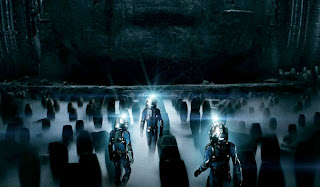 Prometheus is not concerned with this clash. It only pretends to be when the plot's momentum is stalled. Faith, the impetus for the film and the crucible upon which the exploration of these mysterious Engineers is launched, has no bearing on the events of the film at all. There are a couple of pithy debates along the way, sure, but no insight is gained from them because Shaw closes every single one with "things are this way because I believe they are this way." This self-contained reasoning is sound in only the way that faith can be, but it's not exactly satisfying, especially when it's supposed to be coming from one of the eminent scientific minds of her generation. Ultimately, this bedrock for the film is a device to get the eponymous ship into space, and then to close the movie out when all of its cards are on the table and everyone realizes that there has been no thematic growth at all. Shaw believes, and her belief is corroborated, so what is there for her to do now? Believe some more. The emptiness of faith is laid bare, proving itself to be a disappointing subject of study when there's little else to support it.

Of course, ambiguity is a powerful tool in the kit of a conscientious writer, but Lindelof and Spaihts are only interested in it as a means of covering their asses. The film's predilection for "ambiguous" thematic closure, when placed next to both this heavy-handed dialogue and other gimmicks like that ubiquitous black goo that is apparently responsible for all life ever, feels less like a deliberate creative choice and more like a way to secure a sequel. 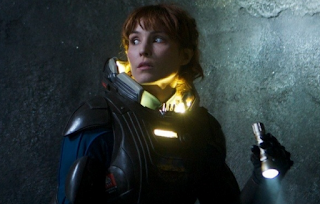 These deficiencies engage in a sort of feedback loop with the dire characterizations. Science versus faith is a boring matchup when their champions are themselves boring, and without interesting people to reinterpret and represent their viewpoints, we learn nothing new about these familiar positions of belief. Shaw and Holloway are humorless, lifeless mouthpieces, and never once do their dialogues sound like anything more than lines in a screenplay. They say what they need to, in the emotional registers they need to, and the scenes close. The rest of the Prometheus' crew has it even worse, since they're essentially as hollow as these two and receive neither the same amount of screen time nor clear motives. The Prometheus is crewed by scientists who exhibit decidedly unscientific behavior (please, lean closer to the alien, I'm sure this will work out well for you) and can't seem to recognize a potential threat (what's this crawling around in my eye? Oh well, guess it's nothing!) Charlize Theron fares the worst, struggling desperately to bring gravitas to a complete mess of a character that the movie thinks deserves it. Is she evil? Is she a robot? What are her motivations? For the hushed enigmatic way Prometheus treats her, nearly reverent in its fascination, the reveals surrounding her character are just a handful of increasingly laughable disappointments. She has one line in particular that is so awful that it calls to attention everything that is wrong with the movie's treatment of all its characters: they're all vault and no coin, facsimiles of people wound around mysteries that, in the context of the film's empty ideology, mean absolutely nothing. 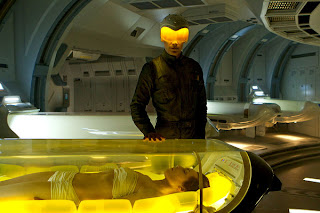 An exception could be made for Michael Fassbender's chilly android David, who mostly works, except for his complete disregard of a scientific method that he should be bound to as a result of his creation. Study the black goo? Run tests on it? Naw, I'll just drop it in this dude's drink! He's a collection of dubious motives just like Charlize, but with a more complete sense of belonging.

So the people are lame and the conflict they're saddled with is meaningless, but what about the sci-fi horror goodness in between? Well...there's one good solid scene that involves Shaw and a medical pod. The terms on which it's reached are ultimately superfluous, the telegraphing too obvious, but the execution is claustrophobic and tight and lands the human fear of inhuman presence that this movie so desperately wanted. Other than this, it's a madcap jumble of scenes and images that must have sounded compelling on paper, but are so far adrift from the plot that they simply come across as excuses for carnage. All of these things make Prometheus easy to look at, but hard to watch, an incessant reminder of its own squandered potential as reflected through its first act. That half hour offers Prometheus at its highest points, beautiful and intriguing with a seemingly vast palette to explore the universe. Only one of these three elements emerges unscathed from the film's narrative self-destruction, a single resounding triumph made all the more frustrating by the disappointment it works so hard to mask.