The Dark Expressions of Breaking Bad

Spoilers for the most recent episode.

I've wanted to write about Breaking Bad for a while now, an urge reinvigorated by its excellent fifth season debut (made even more encouraging by its strongest ratings ever, so Dish Network can suck it). Whenever I rack my brain for something about it to focus on, I always return to the imagery: potent, subtle, dark, occasionally surreal. The visuals of the show exemplify its unique qualities, serving as the grim scaffolding upon which its writing and acting and sound rest. This is a collection of scenes from last night's episode that I think drive home what makes this show so special. 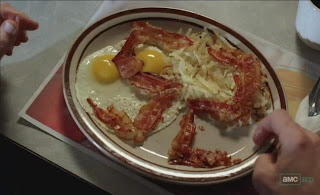 A quiet call-back to happier times. Walt is teetering constantly on the verge of personal apocalypse, so it comes as a surprise that this isn't a secret signal or mushroom cloud but instead a way to remind himself that it's his 52nd birthday. (This comparison could also be read as Walt emancipating himself from Skyler's nasty-ass veggie bacon. Walt Jr. says it smells like Band-Aids, but it looks like dog jerky and that's all I need to know.) 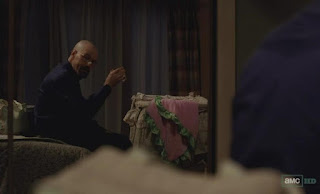 Toasting himself in the mirror with a glass of scotch while watching over his daughter. He's just secured a major victory, but who is there to celebrate with anymore? This is the most paternal, warm thing we see from Walt this episode, a phantom of the loving father he was a year ago - and it's punctuated by his immediate realization that oops, he's still in deep shit. No rest for the wicked. 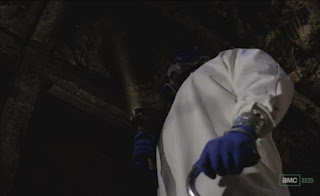 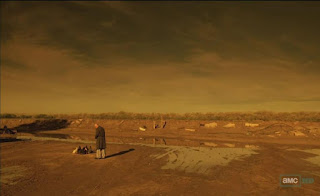 "C'mon, c'mon. Be nice. Let Gwendolyn in there. Gwendolyn don't eat, nobody eats."

Vince Gilligan has this odd way of making New Mexico look like an alien planet. The show and its characters are often locked into interchangeable suburban monotony, but shots like this give character to the stage for all this drama. It isn't Weeds or Law and Order, but something far more harsh, barren. 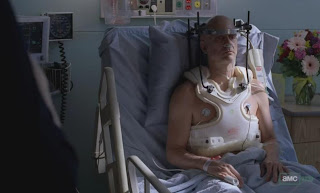 This is a nauseating follow-up to one of Season Four's most darkly comic images: Ted Beneke sliding headfirst into a counter and, presumably, dying. Except he didn't. Breaking Bad has an unmatched penchant for deriving horror from humor and humor from horror. The first exchange is demonstrated by the reveal of a completely ruined man, stuffed with metal and hooked up to machines... 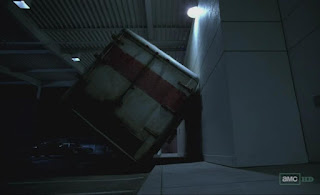 ...and the second exchange, by this sequence. You get about two seconds to laugh at this ridiculous turn of events before you realize how screwed Walt and Jesse actually are. The show derives absurdity from misfortune regularly, to the point where control simply becomes an illusion. The life of each character is ruled by chaos, a reality that none of them can confront. What do you think made Walt laugh so hard at the end of Crawl Space? 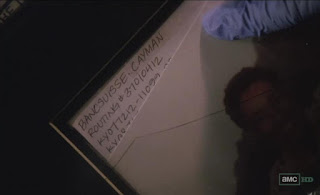 The superimposition of dark secrets on happy exteriors. This probably drives the "IS GUS GAY?!" question home a bit too hard, but it serves a more important purpose. Like Walt, Gustavo Fring was a man toying with forces that proved far greater than himself, and they devoured both him and the things that he cared for. It's a microcosmic representation of truths that Walt has spent five seasons learning the hard way.


And this isn't from last episode, but just because I love it, here's the opening to Fly from the fourth season.