"You Wanna Suck a Brontosaurus Dick?", or How is American Horror Story Good? 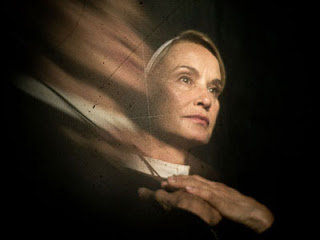 There's a huge difference between horror comedy and horror camp. The names alone should leave this division apparent; it's all a matter of intention. As a positive example of the former category, let's look at Drag Me to Hell, by far the genre's most successful entry in the past few years. It's goofy, but it's also sad and sinister, with a really cruel perspective on karma informing the story. The comedy works because it supports the absurdity of the horror. Horror camp, meanwhile, is often produced as a result of singular horror elements that are not executed well enough but are treated as if they are. Susan Sontag's Notes on Camp delineates the relationship between two oppositional creative impulses in a camp work: "the thing as meaning something, anything, and the thing as pure artifice." And as Sontag says, "intending to be campy is [probably] always harmful" - look at the repetitive, tedious deluge of Z-grade failures produced by SyFy, who are content to throw us paint-by-numbers shittiness and have the temerity to pass it off as a good time. Troll 2 is an awesome example of unintentional camp, a prime example of why bad horror movies brought us so joy in the first place and why intentionally bad horror movies are usually just desperate in comparison. It clearly meant something to the people creating it, but their complete lack of talent rendered it "artificial" to anyone watching.


Camp can be intentional and successful, but it's an incredibly hard balance to navigate. American Horror Story is one of the rare few exceptions. Camp doesn't necessarily suggest a complete miscarriage of craftsmanship, but merely the fusion of ambition with visual and expressive grandiosity. It always entails a generous dollop of ridiculousness, and if you've ever seen an episode of American Horror Story, you're already aware that the show wallows in it. The ridiculousness in AHS: Asylum is tied to a greater narrative undertaking, though Ryan Murphy sometimes shelves that in the interest of whatever busted lunacy he's throwing in front of the camera. Asylum has some really big things to say about the patriarchy, a beast Murphy represents with a whole hell of a lot of literal beasts: zombies, aliens, Nazis, murder Santas, murder children, angels of death, demonic possession, serial killers named Bloody Face, etc. Anne Frank also works her way into there, if you're curious. The second season was top-heavy to a fault, and Murphy and Brad Falchuk were obviously rushing in the final few episodes to conclude their many plots. It is fortunate, then, that the show had a wealth of judiciously plotted and planned content that managed not to lose its main goal to the silliness. The ambition is there and mostly realized, but in a way that keeps it on the backburner until the twilight hours; in fact, the season comes to a close with one of the most subdued hours in series history. It's most accurate to say that Asylum is primarily campy, but the final episode not so much, and that sharp turn reveals a lot about the kind of show American Horror Story truly is.

Initially this felt like a cheat to me. The ending had its share of harebrained flourishes, including a really awesome bully and the camera literally doing a barrel roll to get under a glass table, but it was a comparatively somber culmination of its characters and ideas. This wasn't exactly the American Horror Story I'd come to expect over the last twelve episodes (or twenty-five, if you count the compelling but generally inferior first season). For whatever reason, the show was now all about getting me to CARE about Sister Jude and Kit and Lana...and by God, it actually worked. Three episodes earlier Jessica Lange was chirping The Name Game in a ECT-induced delusion. Sarah Paulson was describing herself as "goddamn plucky" like she was a heroine from a 1940s noir. Evan Peters' ass made at least half a dozen cameo appearances throughout the series. When had I become so invested in this gallery of fools? The cognitive dissonance of twelve episodes of risible, berserk trashiness concluding with near sentimentality is staggering. Murphy's love of these characters and what they stand for rises above it all, though: the torture he foists upon these three is directly correlated to the sympathy he has for them. Sister Jude is the backbone of this friction, as the entire season is essentially a push-and-pull between Lange's portrayal of infinite grace in the face of Murphy's infinite horror. Lange is impeccable, which is why the show works. She personifies camp, in its excesses and enormity, but never in a way that begs for viewer derision. We are invited to despise her, to pity her, and to laugh with her, but never to laugh at her; her suffering is too evident for that.

I've spoken with a few people who are hesitant to watch the show because they think it might be too scary. Frankly, the show is rarely scary at all. It is sometimes unsettling, and it lands several really solid images of gore and disfiguration, if that's your thing. The show comes much closer to its mark when it's providing pure berserk entertainment. When so much atrocity is bundled up so cheesily and packed into one season of television, the first impulse of a discerning viewer is to laugh, and the show does nothing to discourage that. It's full of lesser demons acting totally ridiculous, all of them invitations to jape our way through the carnage - Lily Rabe's demented performance as Sister Mary Eunice, for instance, walks an intoxicating line between being genius and completely terrible. But American Horror Story: Asylum has always rooted its gratuitous brutality in common American concerns. You don't have to look much farther than the title, or Murphy and Falchuk's unashamed hamfistedness, to figure that out. ("Sister, your hospital still administers electroshock therapy to treat homosexuality. It's barbaric.") Moments like these bring home the fundamental relationship between modes of operation for camp art: the artifice, in this case all of AHS's bombastic horror window dressing, and the kernel of absolute meaning, which is Ryan Murphy's treatment of the series as a social manifesto. Because he is so fully committed to both hemispheres, and because he has such a gifted intermediary to explore the play between the two, the show flourishes as camp. It's ludicrous, stunning, hilarious, and trashy, but to write it off as mere trash ignores the show's many successes.