Elysium, Technocracy, and a Curious Case of "Heavy-Handedness" 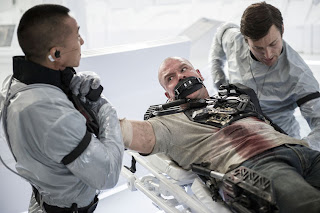 Elysium, the sophomore effort of South African writer-director Neill Blomkamp, continues a tradition of socially conscious action film established by his previous critical darling District 9. Moving away from D9's apartheid allegory into questions of class and privilege in the year 2154, Blomkamp can't be faulted for his ambition: how many blockbuster filmmakers are this invested in delivering a product with a substantial message? Most critics haven't seen it so reasonably, and although the response to the film has been one of lukewarm enthusiasm, many of its champions qualify it as well-made action (and it really is!) that is "hazy" and "on-the-nose" while detractors write it off as having a substantial base for an insubstantial result, as if one of the goals of an action film should not be to provide action. There's a vocal dissatisfaction with the movie's supposed unsubtlety in mirroring the American healthcare system, which is perhaps a result of critics' zeal to prove their understanding, but the multiple subterranean issues of technological superiority that inform the whole movie are completely ignored. Without understanding the face of a world shaped by technology's ubiquitous hand, Elysium might seem "hazy" or "blank," but Blomkamp demonstrates a sophisticated (if unevenly expressed) understanding of the forces that guide our economic and cultural development in an increasingly unstable time.

The key to decoding Elysium rests with the Med-Pod, a scientific innovation that is capable of curing any ailment within seconds. Med-Pods are usable exclusively by citizens of Elysium, a space paradise exclusive to the fabulously wealthy; everyone else rots away on an decaying, overpopulated, nightmarish Earth. But that's not all - the Med-Pods are capable of extending user lifespans, up to three times that of a typical Earth dweller. Imagine what accomplishments you might be capable of if your life was three times longer than that of your peers, and then imagine the same but you're also one of the wealthiest people alive. Elysium secretary Jessica Delacourt's (Jodie Foster) unctuous promises to another Elysian politician about his development contracts being maintained "for the next two hundred years" indicate a standard of systemic abuse that now even death has a hard time stopping. Earth still has medical care, but its facilities are desperately overcrowded and unable to provide comprehensive care to patients. Max Da Costa (Matt Damon), Elysium's unwitting proletariat hero, suffers a severe arm break early in the film after being wrongfully detained by a police robot, and the best his local hospital can do for him is to slip on a crappy cast. Likewise, his childhood sweetheart Frey works at the same hospital but can't even convince her boss to let her dying daughter stay there. And when Max is exposed to a dose of radiation that will kill him within the week, his only hope for treatment rests on Elysium, a million miles away. Survival for Earth's citizenry is left in their own hands, governed by a magnified version of the roll-the-dice logic that American healthcare dangles above the heads of the uninsured. Med-Pods thus ensure that power and privilege remain insular, once and for all, in an economy where the middle class has been stamped out. Advancement is impossible. 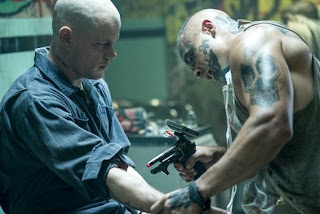 Elysium's intertwining of the broadening divide between rich and poor and the growth of technology, which has long been considered an exponential process, speaks to greater anxieties about the mechanization of our species. If humanity in this narrative has reached a point of scientific advancement that allows us to cure all disease with impunity, it can be reasonably understood that our capacity for other tremendous inventions would create a financial bottleneck. Concurrent with Moore's law, which posits technology as a self-perpetuating development, is Moore's second law, where the costs of said development grow with each new innovation. Tech under this schema is produced by the wealthy for the wealthy, and the few bits of salvage that find their way into the hands of Earth's insurgency are obsolete or prone to dysfunction. Machinery represents a constant assertion of the power of the upper class, designed specifically to oppress Earthling scum: the aforementioned policebot that fucks Max up, the automated parole officer that he unsuccessfully takes his grievances to, and Sharlto Copley's role as a maniacal cyborg mercenary retained by Delacourt to keep Elysium immigrant-free. Factories are still populated by humans, sure, but they're probably paid less than it would cost to manufacture and maintain a machine of similar purpose. A world built on cybercapital is unsustainable, depersonalized, unpredictable; technology is not to be trusted, and railing against it takes an incalculable physical and mental toll on the challenger. Max is beaten down by the robot puppets of Elysium time after time throughout the movie, sometimes for no reason at all. But in order to subvert the machine, the citizens of Earth must paradoxically employ it, as when Max has a superstrong metallic exoskeleton surgically grafted to him, or when bandit king Spider acquires an important bit of code that allows him to hack into Elysium's systems. The most valuable distinction in Elysium's toolkit, the thematic point that distinguishes each party's use of the machine, is the element of humanity and community. Like Max, our actions may initially be motivated by self-interest, but as they pave the way toward opportunity for greater social change, it is compassion for and understanding of our fellow man that ennobles us enough to do the right thing. (It's hard to discuss this aspect of the film, conceived with admirable "subtlety" and yet undiscussed by the critical canon, without spoiling the movie. See it!)

There are some rickety sections in the storytelling, to be sure. The Med-Pod is an admittedly underdeveloped symbol, which can make an authoritative argument for Elysium's merits difficult from either side, and a little more clarity about the systematic structure of both Earth and Elysium would have gone a long way. This is a necessary evil in the development of a movie, which as I've said before, is unable to provide the expository depth that we have come to expect from more comprehensive visual media such as serialized television. It is unfair of the critical pulse to dismiss Elysium as a brainless, heavy-handed action flick, when its politics are outwardly transparent but motivated by forces and ideas that are actually quite incisive. Science without soul will be the death of us all.