Chronicle - Power, Adolescence and The Specular 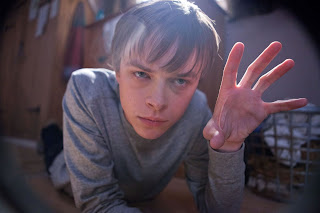 If you've ever talked to me about movies for longer than five minutes, first off, I'm so sorry. That aside, you might have also noticed that I am generally not a fan of superhero movies. They are among the few subgenres that studios throw any sort of money at anymore, oftentimes since they're predicated on pre-existing franchises (comic books, generally), but mostly because it seems like the moviegoing public at large has lost interest in a protagonist who can't lift a car with his pinky or use a magic ring to kill aliens or whatever. Excluding remakes and sequels, 2011's highest-grossing film was the achingly average Thor; if it hasn't already been fiscally canonized by America, then Hollywood would like it to be ripped from the bowels of Marvel/DC, even if a 2010 to 2011 box office comparison might suggest otherwise.

Thus, my frustration with the studio system's unwillingness to take chances, coupled with my general distrust for the genre, gave me a bit of pause before I decided to see Chronicle. Sure, the reviews were strong, but so were Thor's, because critics apparently can't get enough of iPod jokes and perfunctory romances between a dull woman and a dull god. Chronicle deftly challenged my skepticism, proving itself fresh, innovative and insightful, operating around a clear-headed evaluation of the teenage social structure its found footage format is entangled in.

As a pure action movie, Chronicle is sporadically successful. It has a handful of memorable setpieces, like a joyous football game in the clouds and the film's climactic brawl. Despite looking fairly polished on a shoestring action movie budget (though calling 12 million dollars "shoestring" puts a pit in my stomach every single time), the special effects are unfortunately obtrusive. The queasy weightlessness and CGI sheen of the objects that the trio manipulate break immersion regularly, and this movie will probably be discounted at large as digital technology evolves even further. Action as a genre ages extremely hard - just try watching the original X-men, a decade after its release - and found footage even more so. Who has a kind word for The Blair Witch Project anymore? Chronicle's strengths, which are mostly removed from its direct visual depictions of the "superpowers," seem destined to fall by the wayside.

It is through the film's choice of genre and format that those aforementioned strengths become possible, however, and therein lies the rub. Protagonist Andrew Detmer, primary cinematographer and social outcast, uses his camera as a means of assessing, positioning and capturing a world that is generally not kind to him. Within the first five minutes of the film, he has recorded evidence of his father, cousin, and kids at school behaving contemptuously toward a creep who won't turn his goddamn camera off. Andrew's relationship with his camera is more complex than any found footage film yet made, especially as a reflection of today's incessant documentary climate. In a world socially regimented by Facebook, Youtube, Tumblr and Instagram, all of which provide a platform for expression through visual means, the idea of an Andrew Detmer lurking behind a camera at any given moment seems increasingly possible. Better yet, it also permits the film a cinematic dexterity rarely seen in found footage films, since anything recorded by any source is game for Chronicle to display - security footage, iPhone videos, and the like. It is a crafty usage of a society that the film argues is saturated with the need to record.

With all this in mind, the "we have to document EVERYTHING!!!" attitude that plagues Cloverfield and [REC] and just about every other film in the subgenre becomes more than an excuse: it becomes an organic extension of the movie's themes. Andrew really DOES have to document everything because it is a question of identity, a self-assured activity that gives him a chance to express himself in circumstances that generally don't. When he, his cousin, and a popular tag-along from a nearby party have an encounter with an alien life form and develop telekinetic powers, reconciling this with his obsession with videography seems difficult. Indeed, Chronicle precipitates in a way that condemns this both as a conduit for teenage narcissism and an access point into parts of our personal lives that not everyone should see, until a high-powered conflict at the end that just about everyone with an electronic device seems able to record. 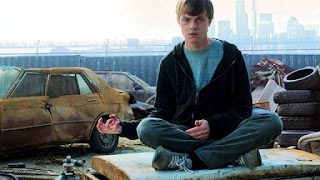 But it only makes sense that someone like Andrew, who has spent his entire life being marginalized and ignored, the product of an alcoholic father and an invalid mother, would want to perform for a world that scrutinizes people in a higher capacity than ever. Chronicle is not particularly subtle about this (if the father was any more evil, they'd have to give him a tiny mustache to twirl), but concerns of subtlety become trivial next to sharply-expressed character moments, like the talent show and the subsequent party after. Andrew's use of his powers is selfish at best and reckless at worst, but they have finally given him an opportunity to level the playing field; that backstory, slightly mawkish though it may be, is a perfect foundation for the events of the movie.

To divulge much more would ruin a movie that makes some surprisingly audacious choices, but for a PG-13 movie that deals with teenagers and superpowers, Chronicle refuses to softball its characters at all. Movies for adolescents about adolescents that realistically deal with the consequences of their actions are few and far between (especially ones that skew this dark), which makes the film's box-office success all the more heartening. Not perfect by any means, but absolutely worth catching.