Mass Attack 3: The Democracy of Whining

This post is about the reactions to Mass Effect 3's ending and not the ending itself, so unless you consider the knowledge that the game had a controversial ending to be a spoiler, then you should be safe. But then if you're a gamer who's not aware of this shitstorm by now then you probably don't know how to read so why are you even here? 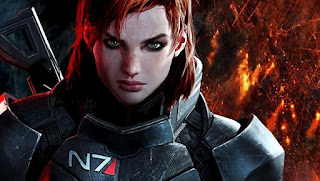 It isn't as if bad endings are particularly new to video games. Three decades ago, when the form was still in its infancy, it was par for the NES course to be rewarded with "CONGRATURATIONS! YOU ARE GREAT" and a jarring return to the start screen. Even once gaming had moved away from its typically bare-bones narratives, there were still disappointments aplenty to be found amidst the epics. Who remembers the ending of Fable? And though I never played Knights of the Old Republic 2, a trip to Youtube reveals a game that culminates in a visually tedious ten minute conversation, a twenty-second cutscene, and then credits.

Obsidian, however, somehow managed to dodge the public flogging that Bioware has endured lately. Once held on high for their expansive, open-world RPGs, they're currently being pilloried all over the Internet for their handling of Mass Effect 3. Sure, few people were happy about KOTOR 2's famously rushed ending, but things died down soon enough. The fan outrage this time around is unprecedented; relatively level-headed expressions of disappointment, such as the Retake ME3 charity, were quickly co-opted by those rabid folk drawing attention to themselves by filing complaints with the FTC or boasting that they were able to get a full refund from Amazon after completing the game. Few concrete results came from all of this sturm-und-drang, naturally, as Retake ME3 degenerated into a mess of confused and angry gamers and the FTC doesn't care about Mass Effect 3.

BioWare got the message, though: people are fucking pissed. They've poured 100+ hours of their lives into this epic saga, the last ten minutes didn't meet their expectations, and they're going to make the developers pay for it in blood - or at least a new ending. In some ways, I think this reflects a highly industry-savvy attitude on the part of the Internet. They paid for a product, it failed to deliver, and they feel it's their right to complain. Fair enough. That sensation of dissatisfaction is further amplified by the illusion of agency that video games provide; being disappointed with a movie's ending is a completely different feeling than having "been a part" of an experience that ultimately let you down. It thus makes sense to the unhappy parties that their sixty dollars should buy them some sort of compensatory efforts from a business that is invested in giving them what they want. Gaming has been monetized faster than any other medium, but consumers are learning their rights just as quickly.

The question is whether or not the fanbase's understanding of their relationship with BioWare entitles them to exert creative control over them. I'm not trying to determine here whether or not the ending is successful. This is more of an effort to find the line between the "rights" of the storyteller and the "rights" of the consumer. Many fans seem to think that, because they were burned by the consumerist impulse, this somehow grants them free rein to determine how BioWare should be crafting their games. Look at the rhetoric of that GameFAQs poll. The question isn't "Did you like the ending of Mass Effect 3?" but instead "Do you think BioWare should change the ending of Mass Effect 3?" And the choice that 37% of the respondents went for is "if it's what the users want, they should get it."

Of course a smart company is going to play to its consumer base. It's healthy for fans to have an outlet where they can create a dialogue with the content producers. The problem with letting them shape the product to this extent is that peoples' tastes are fallible and they don't always know what they want. Square-Enix learned this the hard way with Final Fantasy 12 and 13, designing the latter as a remedy to the savage backlash the former incurred. I can only imagine the looks on the developers' faces when 13 came out and critical and fan reactions were actually WORSE. If they couldn't win with either an earthy, mature low-fantasy aesthetic or a hyperballistic vomitorium of colors and jargon, and they couldn't win with open-world quest-oriented gameplay or twenty-five hours of crippling linearity, then how were they supposed to win at all? (My bias might be showing.)

Perhaps there's a clear if not pessimistic answer that can be derived from all of this: gamers love to complain. This culture more than any other is perpetually upset over things that are ultimately quite trivial. But now this deepened understanding of the economic climate of video gaming is challenging the nature of that triviality. A movie costs ten bucks, so it's gonna suck if you didn't like the ending. A video game, however, is sixty dollars, plus whatever your investments were in the prequels, plus any DLC you may have acquired, plus the looming possibility that BioWare and EA might take your complaints about the ending and leverage them into making even more money. Not that they would - greedy as EA might be, they would have to be absolutely insane to take the one possible solution to this PR nightmare and use it to bleed their infuriated customers drier still. If anything at all, I think the most disenchanting part of this Mass Effect 3 debacle to people is the shattering of that sense of control that video games often provide us with. Millions of Mass Effect fans created their Shepard, guided him or her through three chapters of intergalactic intrigue and adventure, and found themselves sidewinded by the realization that they really DON'T control their own fates. BioWare does. EA does. People are going to try and "reclaim" that power, but those efforts come from a fundamental misunderstanding about how video gaming and the industry truly work. You're participating in someone else's creation, and although it may be in a different way than films and books and television have prepared us for, they're going to get the final word.
Posted by Drew at 7:10 PM