Ain't no friends of mine 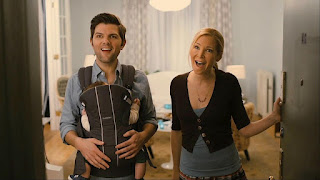 Friends With Kids, the directorial debut of Kissing Jessica Stein writer Jennifer Westfeldt, would be nothing special if it wasn't so fucking annoying. Its crimes against palatable film making are numerous, most of them stemming from a screenplay that presents us with a predictable upper-class white dilemma and feeds it through the mouths of six exceptionally irritating human beings. It takes a special kind of incompetence to waste the gifts of Adam Scott, Kristen Wiig, Maya Rudolph, Chris O'Dowd, and Jon Hamm, rendering them all either indistinct or unlikable. More disappointing still is that, in a cinematic landscape where so few women are allowed to write AND direct, Westfeldt felt it appropriate to create a story where all of the female characters are shrewish, neurotic, over-emotional caricatures. The type of women you see in ugly sexist romcoms, scribed by thirty-something men with mommy issues, are the only type you see here, for reasons I just can't understand.

So what's the best way to make an annoying person even more annoying? Have them talk to a baby, of course! People in this movie are constantly talking, as Westfeldt's attempt to create a warm group atmosphere boils down to having every character speak very loudly at the same time while sweltering under hideous orange lighting, but their true colors shine through when she puts them in front of an infant. In order to demonstrate how the movie made me feel, I've assembled a soundboard representative of every awful base this movie covers: entitlement, snobbery, shrieking, crying, obliviousness, abrasion, breathless cooing baby talk, poor word choice. And this is, for the most part, AFTER excluding the baby sounds. You're welcome.