Horror is a genre that has seen varying levels of success over the last forty years. Action films can always be counted on to make a pretty penny, short of the occasional bomb (though to be fair, they haven't been so occasional this year), and comedies often turn decent grosses on much smaller budgets. Horror has never been so reliable. It's difficult to track what audiences find scary at any given point in time, and even if some studio has tapped into the zeitgeist, they can't always translate that into a good movie. This decade has proved to be one of the rougher patches for horror, save for new installments in the Saw or Paranormal Activity franchises. 2012 hasn't seen either of these come back around yet, and much of everything else that has come out so far this year has been low-profile and fiscally disappointing. Cabin in the Woods did okay, but the only two breakout successes were The Woman In Black (surprising but not totally undeserved) and The Devil Inside (ugh, fucking kill me).

No matter how poorly it does, though, I love horror. I love it at its best and worst, at its most brainlessly shitty and at the height of innovation. No other genre is as compulsively watchable to me, and since I've seen so few movies overall this year, I want this set of posts to act as both a catch-up for myself and a series of capsule reviews in case y'all are looking for something scary to watch. There's no real connection between whatever I review at any given time, just the ones that are itching to get out of my brain and onto the empty Blogger page. With that:

Cabin in the Woods 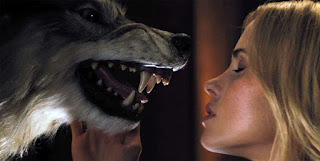 Easily the best horror film of the year so far, if not the best film period. Its role as a conventional teenagers-adrift slasher is questionable since there's very little conventional about the movie at all; some may find it a disappointment in that it simply isn't very scary. The film completely subs out fear, not really its strong point, for a pervasive sense of dread by the third act, which ends up being a much better fit for its nihilistic message. Likewise, the humor operates at a comfortable 70:30 hit to miss ratio, as it has in everything good ol' Joss has ever laid his hands on. Cabin in the Woods earns its keep with a thoughtful, confidently asserted premise, rich with an understanding of the horror genre that positions writer Drew Goddard as both scathing critic and diehard fan. Superb pacing, anarchic fun, and a surprising undercurrent of sadness make this an exceptionally unique offering to the genre canon. A- 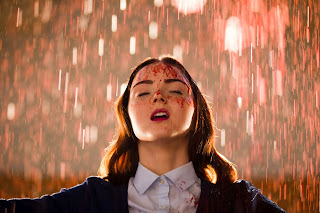 Lily Cole has an awesome face that just sort of floats, along with this movie, from scene to meaningless scene. Previous to this she made her bread and butter as a model - and I imagine she is a great one, exemplifying the sort of bizarre beauty that fashion houses are always on the lookout for, but her facilities as an actress aren't enough to salvage this supernatural tale of BFFs torn apart. The Moth Diaries stabs at a couple of concepts that at least give it more distinction than Twilight, ones that might resonate with a early teenage audience like forced social alienation and abandonment, but they struggle for attention amidst a slew of boring people getting murdered and cheesy black-and-white flashbacks. Watching this while knowing that Mary Harron went from American Psycho to this pallid, YA-novel nonsense is seriously depressing. If you know any particularly morbid younger girls, this might be a good fit for them, but there's really nothing here for anyone else. C-

The first half hour is great. Lots of atmosphere, a couple of good scares, great acting and strong character work. A majority of the plot hits overly familiar beats, though, and all of that early promise eventually settles into a routine with few possible outcomes. "Are Clive Owen and his daughter mutually hallucinating a home invader?" is a cool question to set a movie around until you realize that, once you get past all the childhood trauma plot twists and exhausting dual timelines that lead us there, there are only two real answers to it. This doesn't even necessarily have to be a problem, but the ending it settles on is predictable in every single aspect except how surprisingly dumb it is. Recommended with reservations if you've got 100 minutes to kill. C+ 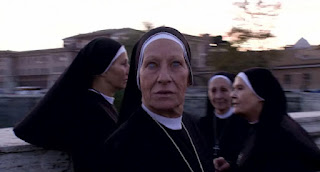 Do you think blind nuns are scary? Did you think The Exorcist could have used less of all that boring talking? Are you getting sick of movies that have endings? Well, have I got a surprise for you! An obvious pretender to the Blair Witch Project/Paranormal Activity POV throne, this exorcism exposé's sole value to its genre is simply to remind us why those films worked by completely failing at everything they succeeded at. The acting and staging are dire, which immediately unravels any attempts at creating found footage of a "real event;" the only way each scene could seem less real is if you could hear the director begging his talentless cast to try and act inquisitive, or possessed, or like they have real people feelings. The subject matter is, true to form for nearly every warmed-over Exorcist ripoff shit out across the last two decades, a hash of cliched ecclesiastical nightmare imagery...but with excessive vaginal blood gush added for flavor! It is, much like The Devil Inside, as classy and effective as it sounds. D 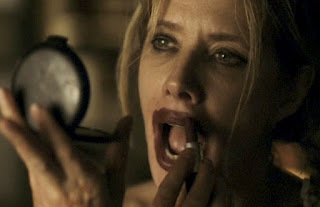 The French have been making a name for themselves in horror this century, but none of their efforts have been as full-tilt insane as The Divide. What I saw here, amidst all the apocalypse sex dens and overplayed machismo and "subtle" 9/11 imagery, was an flawed little puzzle of a film. Normally this much ridiculousness would be an immediate sell for me, but there are a lot of problems that keep this from becoming the unhinged nuclear funfest that it could have been. The movie suffers from a debilitating pacing problem; it's so anxious to trap these people in their fallout shelter/basement and drive them insane that it does so at an unrealistic rate. Everyone turns into a complete asshole after about five minutes of confinement, which is annoying, but when you consider that the movie is TWO HOURS LONG then it becomes simply inexcusable. Xavier Gens is unwilling to let his characters or the plot breathe for a bit, instead heaping on atrocity after atrocity in a repetitive bid at stressing the insanity of this situation to us. The sloppy timekeeping, implausible situations, and irritating cast of characters all compromise a set of interesting ideas and game actors. Ultimately the movie ends up as a head-on collision of good ridiculousness and bad ridiculousness, which often produces entertaining results...but when it's TWO HOURS LONG the investment may not pay off in full. Ludicrous, effective and risible in queasy alternation, the movie is nonetheless unique, a quality that I'm always on the lookout for. C+
Posted by Drew at 7:09 PM