Lincoln: Anatomy of a Rottentomatoes Capsule 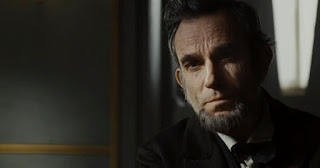 "Daniel Day-Lewis characteristically delivers in this witty, dignified portrait that immerses the audience in its world and entertains even as it informs."

- Rottentomatoes.com's summation of the 90% positive critical response to Lincoln

Oh, yes. Coming in as a shocker to absolutely no one, DDL knocks another one out of the park. What's that "one" exactly? Over a dozen weighty, metaphorical monologues, most of which are underscored by a typical John Williams orchestra wank in order to remind us to be moved or stimulated or wryly entertained. He's the smartest, saintliest man in every room he enters, which ultimately grows weary because we already know he's right and we already know that the 13th Amendment will be ratified. It's like trying to convince an audience that Hitler was evil. Lincoln's hollow racial motives are handwaved away via one conversation with a tearful black maid, and what few personal demons we are privy to are teased out by - surprise! - his wife. Using a woman to peer into the troubles of a venerable public figure feels cheap and common. And sure, Lincoln was a great man, but Amelia Earhart was a great woman and that didn't stop critics from crashing that plane. That film had its problems, but it's not like Lincoln doesn't either. Biographical sanctification, long decried as a major flaw for any biopic, is apparently excusable here through the efforts of DDL alone. He's great. Of course. But the Lincoln he portrays is shallow, made to sound deep through densely worded politicking and a surfeit of three-minute tangents (also given an attempted handwave by a character attempting to make Lincoln sound like he isn't the best storyteller in the world). The entire movie is a gift from him to Spielberg, a two-point-five hour long Oscar reel for a man that hardly needs it.

b) "in this witty, dignified portrait"

Counterpoint to "witty": how about babbling? Again, the movie is so enamored with its own wordiness that anything that could be remotely construed as wit becomes agonizingly protracted. Not that I expect Tony Kushner, an awfully long way from Angels in America, to Sorkinize 1865 political parlance, but every single scene and dialogue has the same rhythm: slooooow. The only change from line to line is volume, because even with the linguistic evolutions that have transpired over the last century and a half, people still used to shout when they got angry.

Counterpoint to "dignified": any scene with James Spader's woeful political buttonpusher W.N. Bilbo. The movie's most gruesome scene, involving a wheelbarrow full of limbs, paired with its refusal to show the assassination of the president under the insinuation of "dignity." The very idea that a film that contains at least half an hour of gale force monologuing has any grasp of the kind of restraint necessary for aforementioned "dignity".

c) "that immerses the audience in its world"

The movie looks beautiful; top shelf Janusz Kaminski, reverently lighting and shooting the film like a collection of Old Hollywood portraits. That's basically where my praise for the movie ends. Immersion is awfully difficult to reach when the only noteworthy characters you've got to guide you through this Congressional marshland are DDL, a serviceable Tommy Lee Jones, Sally Field doing a pretty unremarkable Long-Suffering Wife, and about five useless minutes of Joseph Gordon-Levitt. This movie doesn't skimp on its casting, with a gallery of fresh and familiar faces alike, but it suffers a similar fate to last year's Tinker Tailor Soldier Spy in that nearly all of these faces are used to push a point of view or political stance rather than do anything vaguely human. They are not, nor does the movie ever even pretend to care that they should be, people. The only differentiation between a majority of this movie's hugely overstuffed cast is what kind of Muppet they look like. Forget any hopes for a notable African-American presence in the film, by the way: their sole purpose is to remind us, by standing in silent solidarity while their light-skinned oppressors propel all the action forward, that this was a very good thing to happen for black people.

d) "and entertains even as it informs."

Ugh, but only in the most insulting way possible. Spielberg wants us to remember that history can be fun too! So what better way than to break the flow of a movie that's already excruciatingly long and boring by inserting scenes where James Spader is really wacky? Did you guys know that people said fuck back then? Did you know that they made jokes about poop? They really are just like us! There hasn't been such an ill-conceived marriage of drama and comedy since...well, Cloud Atlas. Call this the year of ponderous, overreaching bullshit.