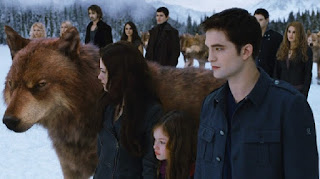 As of twenty-four hours ago, I have seen every single movie in the Twilight saga. Offering comprehensive criticism would be both redundant, in light of the fact that Twilight has been the Internet's punching bag for the last five years, and impossible. I really don't know how I feel about the films at all. They're so dramatically inert that they are rarely fun to mock, and even when the craftsmanship is decent (Eclipse, Breaking Dawn Part 2), it amounts merely to a streamlining or beautification of total uneventfulness. I don't relate to any of the characters or situations, and the saga isn't exactly a must-see cultural phenomenon since the majority of people will likely turn against it or forget about it within the decade.

And yet I watched all of them. I even paid ten dollars to see the final installment in theaters, which I regretted just like I knew I would. Just like the previous four, it was 20% moderate schadenfreude, 80% tedious moping. So the odyssey came to a close and I found myself no more aware of why I stuck through it all.

The likely answer is that there is no answer and I wasted ten hours of my life on a series of mostly awful movies. But there was such an inexplicable, compelling force about them that even after the first one befouled my television, I just kept watching. Initially I chalked it up to sociological curiosity, a driving need to figure out how exactly these thoroughly brainless stories cultivated such an ardent, massive fanbase. The answers sit at the surface, though - a blank slate of a girl who has two attractive powerful men, as well as all of their loved ones, ready to go to war for her. Despite no demonstrable talents, personality, or charisma, she somehow manages to sucker the whole world into buying into her worth simply by virtue of not being a rank asshole. It's a good enough message, I guess, but how about something a little more valuable to young women like "love yourself" or "be an individual" or "don't date controlling undead?"

But today I read this article, written around the time of Breaking Dawn Part 1's release, and I couldn't help but wonder if I was misreading the films. You may not want to give a typical Twilight fan much credit, but there's generally a pretty broad gap between the viewing habits of a 14-year-old and a 24-year-old. Hey, wait, I'm 24! And as weird and fucked up as I am, my motivations and desires can't be all that different from most people my age. In order to figure out the allure of the movies to a demographic I'd never considered, I needed to work backwards, find an emotional Rosetta Stone to tell me what my peers are looking for and decipher the rest of the series from there. I picked the scene I found to be the most effective in the series: the wedding of Bella and Edward. 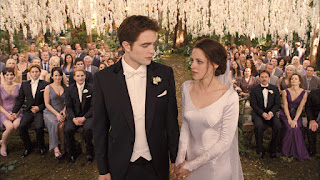 The wedding is only possible because it exists in a complete utopian vacuum. Money is never even breathed about through the series, so naturally it's an affair of dreamlike extravagance; the clans have called an uneasy truce, averting any worries of icky bad feelings ruining their special day; and Bella and Edward, as is befitting of a love dreamed up by one of the most-read romantic fantasists of our time, have absolutely no problems with each other. Any and all strife in their relationship is entirely a consequence of factors beyond their control: the Volturi, manic bloodlust, Jacob's idiot face, Edward's inability to avoid fuck-bruising Bella, etc. They, as a couple, are perfect, no matter how much contrary evidence you'd like to list. It's just the world around them that's not.

None of that matters, of course, on the day of this very happy occasion. They're young/young-looking, beautiful, and will almost surely surmount whatever challenges may cross their path. It ties the bow on the series; everything after is just resolution for the shit that Twilight fans only pretend to care about. Stephenie Meyer makes this especially clear with the horrendous climax of Breaking Dawn Part 2, where the one scene of any dramatic importance is a) not actually in the book and b) doesn't fucking happen it was one of Alice's visions AUUUGH WASTE OF 20 MINUTES. Really, all of BD2 is just Meyer calming down Team Jacob by giving him a vampire baby with progeria to fuck. The wedding is the real climax of the film, the impossibly beautiful pinnacle of the fantasy, and it's given the richest treatment. Everyone just seems so happy for Kristen Stewart, and in spite of her universally terrible performance she actually seems happy too! The scene satisfies on all accounts: younger viewers are given a ideal moment of undiluted joy to look toward. Older viewers (especially those on the 40+ spectrum) see Bella experiencing a happy time in the midst of a world that, as they likely know best, is often uncharitable.

I guess I'm just soft, but this is the one time watching all five of these movies that I actually felt a thing. I had hit the core of the mythos, having finally fought through all of the tedium, and it actually proved marginally rewarding. Beyond the drama lies two young people embracing one another in the midst of impending disaster, and for some reason that resonated with me past the point of cynicism. The problem, of course, is that it's just not enough of a payoff for the gigantic load of unrealistic, boring inanity that precedes it.

Email ThisBlogThis!Share to TwitterShare to FacebookShare to Pinterest
Labels: movies, Twilight, vampires, why is this happening to me