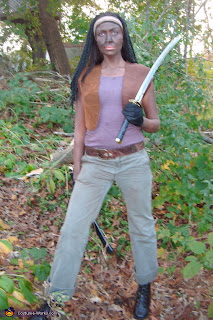 Spoilers for the whole season, up to last Sunday's (12/2) episode. Also, here, have some Michonne blackface.

In a series where the major dramatic impetus nearly every episode is a character doing something really stupid, The Walking Dead's first two seasons rarely allowed its female characters any sort of redemptive moments for their follies. And if they're not botching things royally and then eating shit for them, then they're window dressing, meant to deliver a few lines where needed and fade into the background. Halfway into the third season, and with a writing team that's really stepped up their game, has it gotten better? Sure, a little. Could it get better still? Yeah. And I understand that characterization has never been the strong point of this little undead yarn, but when you compare any of the women to Rick or Daryl or even Carl, their developmental trajectories are either radically thinner or almost non-existent. But for the most part they're trying, and here's how: 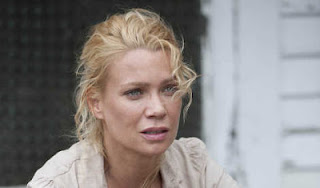 Andrea
I admit a certain bias toward Andrea, because I think she's most closely in line with how I'd behave in case of a zombie apocalypse. Considerable potential, a barely suppressed zombie fight-lust, and the willingness to verbally smack down Lori, but usually we're too stuck up our own asses/sad/busy making poor choices to realize much of that potential. We are also both big fans of the menfolk, something that's been getting Andrea into all kinds of trouble since midway through Season 2. First she sits on Shane's dick, and then lets the NOT SINISTER AT ALL Governor get it too? She's basically being pushed from plot point to plot point by abusive, creepy men. And sure, she has no legitimate reason to distrust The Governor, short of Michonne's wild-eyed intuition...and the zombie gladiatorial sports...and the fish tanks full of heads and little zombie Penny chained to a wall...I dunno, the show sure is trying to convince me that Andrea is smart, and I'm sure Andrea could convince me that Andrea is smart, but she isn't being given the opportunities. Laurie Holden is billed third in the credits - she's one of the few remaining survivors from the initial group - and yet she is constantly playing second banana to the men around her in every single scene. Perhaps this is intentional, and she's going to have some kind of wild gender outburst later in the series, but there hasn't been much pointing to this direction. All of this is a pretty major letdown for a character that closed out the previous season by killing half a dozen zombies solo while exhausted and without ammunition. 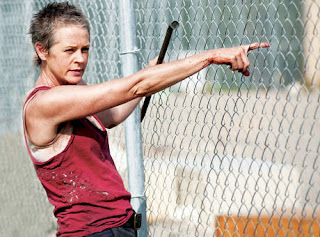 Carol
In Carol's defense, she's made some pretty substantial improvements since the first two seasons, both in terms of discernible character and overall usefulness to the story. In Carol's not-defense, what the hell is she even still doing there? She's escaped the "zombie chow" tag for a period of time that has shocked probably everyone watching the show, only to contribute just about zip. She once tethered Daryl to the group in uncertain times, and will likely continue to do so now that this whole brouhaha with his brother is erupting, but she has no value of her own. The show didn't even let her use her newly acquired C-section skills during Lori's troubled pregnancy. Carol had to cut open a zombie vagina for nothing! 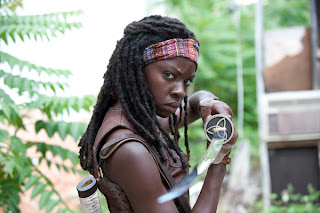 Michonne
Michonne, for the most part, really sucks. Shouldn't this character have lit the show on fucking fire? Black swordswoman of few words kicks ass, takes names, gets shit done, figures shit out. A competent new arrival would have done wonders for the series, especially considering that it rotates out its black characters like a fucking carousel, and yet Michonne spends 90% of her screen time doing nothing but glaring at shit.
"Hey, Michonne, this is a neat little town that seems really safe!"
GLARE.
"Hey, Michonne, The Governor is a pretty cool guy!"
GLARE.
"Hey, Michonne, look at this gallery of severed zombie heads suspended in water!"
Slight shock, then GLARE. What a waste of a cool concept! In theory I like the role she fills, but from what I've read the showrunners have made her even less expressive than she was in the graphic novel, which equates to infuriating scenes like her confrontation with Andrea in the mid-season finale. Yes, just keep GLARING, this will solve your problems. Don't bother mentioning that they sent Merle after you. Andrea doesn't need to know about The Governor's creepy notebook or the fact that he's keeping his walker daughter imprisoned. And God forbid that you mention his hostages, even though she might not be familiar with them! (She is, of course, which makes the events that transpire even more agitating.) Michonne is this season's perennial holder of the Idiot Ball, and that is probably the greatest shame of what has been an otherwise terrific season. 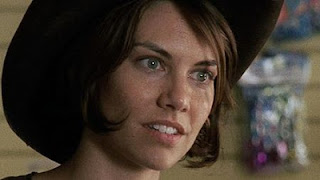 Maggie
Name one characteristic Maggie has besides "tough," "loves Glenn," or "has a dad." Go ahead. I'm waiting.
("Hot" doesn't count.)
(More infuriating still is her insistence on bringing up the Dumb Hat Count. I mean, Carl is 12. What's your excuse?) 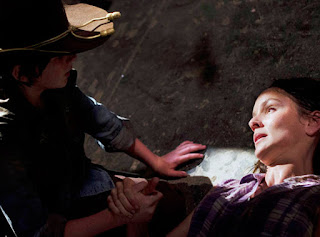 Lori
The Walking Dead had a major issue with Lori and everybody knew it. Shrill, hypocritical, and authoritative without cause, her greatest purpose to the show's narrative was to provide uncomplicated antagonism and further tension between Rick and Shane. The static nature of her character was made worse by Sarah Wayne Callies' unimpressive performance (put your trembling hand in front of your mouth one more time, I dare you) and the inertia of the second season, where even the interesting members of the group had little to do. Initially Lori's uselessness could be interpreted as a casualty of the show's inability to consistently characterize a majority of its cast, but as the third season started and the writing staff found a new sense of focus, her only remaining relevant trait was her pregnancy. As both an obsolete vestige of an already-bloated cast and a fan unfavorite, there seemed to be little to do with her as the new prison arc commenced.

So they ripped the baby out of her and then killed her. Harsh, to be sure, but certainly not out of character for this world. Objectively I should have relished this moment, as an ardent member of the anti-Lori camp, but it was actually really sad! I was retroactively sold on Lori's anguish, her regret at not doing a better job as a mother and wife, and moved by her final words to Carl. Perhaps it's a little disappointing that Lori had to be cashed out permanently in order to give her value, but that character was so far gone that I can't imagine any other options would have worked. Good, then, on The Walking Dead for taking a thoroughly unsympathetic character and making her sympathetic in her twilight hours. And good on it for implementing new development for these women in a subtle way, and not cheaping out and turning them into Mary Sue badasses overnight. But when you tell me that Andrea and Michonne have spent the last eight months surviving the winter and slaughtering the shambling hordes while doing it, can't you at least give me a little proof? 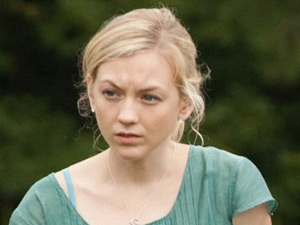 Beth
Whatever. If I wanted Frankie Muniz on this show, I would have asked for him.
Posted by Drew at 10:01 PM

Email ThisBlogThis!Share to TwitterShare to FacebookShare to Pinterest
Labels: 2012, The Walking Dead