This kingdom. This amazing kingdom we have made. This monstrous kingdom. Its castles are magic. They are beautiful. They are built on dreams and iron and greed. They are inorganic and cannot sustain. No kingdom lasts forever. Even this will end. And life and Earth will reign again.

I try to avoid talking about myself when I write these posts, primarily because I'm here to highlight media that catches my attention, not the toiling of a disenfranchised quarter-lifer. Most of you are probably within a year's distance of completing college, one direction or the other, and you already know what our lives are like.

But Enlightened resonates with me. So much of the show's appeal to me is a byproduct of how frankly it addresses some serious issues with our world, on both interpersonal and international levels. For those unfamiliar with Enlightened, which is likely most of you given the show's criminally low viewership, it tells the story of disgraced corporate drone Amy Jellicoe. After a manic breakdown and a revelatory stint in a new-age rehab center, she attempts to enter the world once again, her rage and confusion layered over with a new insurmountable optimism. Goal Number One: overnight reform of her previous employers, rapacious megacorpoation Abaddon. Abaddon, we come to learn, is Evil Capitalism incarnate, destroying the environment and inciting violent civil unrest and producing toxic products with no concerns but for the bottom line. They take delight in crushing the little guys and buy off politicians. Anyone who isn't Amy can infer the tremendous challenge present in realizing this degree of change. 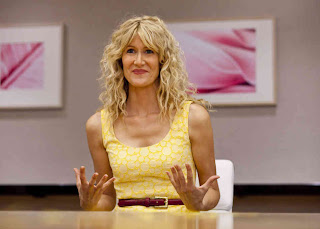 Amy's a ball of inchoate philosophy, recently blessed with the absolute knowledge that our world is fucked up. She wants only to do good, but her more base desires are so deeply ingrained in her that her impulses typically sabotage her intentions. If the aforementioned breakdown wasn't a tipoff, this woman is a persistently uneasy presence. One episode early in the first season sees Amy desperately trying to find help for a mother threatened by deportation; her lack of social grace, unfortunately, brings her to reappropriate her ex-best friend's baby shower as a platform to generate support. The effort is obviously unsuccessful, and Amy is left wondering once again why people no longer want to communicate with her crazy ass. "Why are we so fortunate when others are not, and what can we do to help them?" is a refrain for Amy, delivered with the utmost sincerity in the worst possible contexts. We understand that she is frequently misguided in her quest, and her clumsiness acts as a conduit for the show's masterful cringe humor, but after the uncomfortable laughter the salience of her point stands. Enlightened, generously assuming that we are all viewers of sound conscience, uses Amy's forthcoming nature in tandem with her demagogic incompetence to hold up a mirror to our own potential philanthropy in a way that captivates without preaching. Do we do so little because we are afraid of seeming like Amy? Caring leaves us socially and emotionally vulnerable, but if we're doing the right thing then why should that matter?

It matters because, just like Amy, we are humans and not mouthpieces. The business of looking out for ourselves is becoming increasingly complicated, and I know that the last thing I want to do when the world bombards me is to turn inward toward more atrocity. It is hard and costly to devote oneself to a cause, especially to the extent Amy strives for. Becoming conscientious is different for everybody - hell, it took Amy fifteen years at Abaddon, combined with a hysterical workplace meltdown, for her to realize what kind of soulless ladder-climbers she's given her life to. She's condescending, officious, and tends to be straight out unlikeable, all of which trickle into her soapboxing. But personal demons be damned, she makes the change. She reorients her goals to repair the people and the systems around her, gradually learning that such aspirations come at profound personal and professional costs. 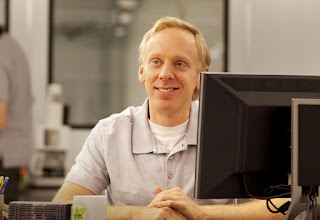 I can't be like Amy, not yet. I would like to think that if I turned my back on this rat race and poured myself into doing legitimate good, then it would happen for me. Right now I'm not brave enough to do anything but try and survive (barely, begrudgingly) and to do well by the people around me (annoyingly, with questionable results). Immediate and drastic social upheaval isn't what Enlightened is championing, though. Amy's all about this approach and it hardly ever works out for her. The show sympathizes with the middle ground between inaction and fervor, and that's why we have Tyler. Characterized by series creator Mike White as the feminine, supportive energy to Amy's unconventional masculine dynamism, this self-described "ghost" assumes the role of the noble observer. His intentions are true, but for fear of rocking the boat, he struggles to brand himself the revolutionary that Amy so desperately wants him to be. Whether or not he actually joins her quest to transform Abaddon is a question for potential viewers to uncover (subliminally: watch the show!), but Amy is there to spur him toward her cause. The good ghosts of the world, White would suggest, need a simple push in the right direction when they're ready.

Enlightened is supremely forgiving of goodness, which it teases out of just about every character. Amy Jellicoe is occasionally dim and borderline psychotic, but every episode begins and ends with brief prayer-like narrations from the inside of her mind. Her external actions may be inscrutable to the characters around her, but these ruminations allow us subtle insight into her thought process. Without the benefit of this frame, many of us would likely not befriend Amy if we knew her in real life. I imagine myself politely tolerating her ranting about Abaddon for a couple of weeks at most. But she's right. And she's unafraid. And I may still be, but Enlightened is patient and encouraging. It reminds me that it doesn't have to be like that forever.
Posted by Drew at 8:07 PM