Ni no Kuni: lemme get those digits 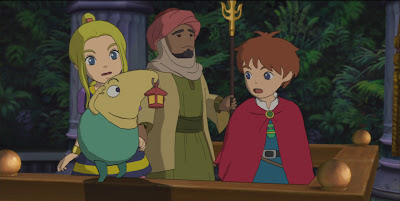 The JRPG is a troubled genre in a wild and unpredictable medium. Not one generation ago, the PlayStation 2 was host to everything from obscure one-shots (Ephemeral Fantasia, Tsugunai: Atonement) to celebrated series (Suikoden, Final Fantasy) and just about everything in between. Looking over Sony's RPG offerings for PS3 is a much more dismal enterprise. Most of the notable titles seem to be American-developed actioners with RPG elements, while the Japanese games are uninspired, halfhearted, or DLC packs for Hyperdimension Neptunia. Nearly every new IP released this generation was met with relative indifference, but the franchises have been hit just as hard. Suikoden is MIA, Tales has never been worse than the dismal Graces f, Star Ocean has lost its way completely, and Final Fantasy XIII is Square-Enix's signed confession that they've forgotten what made the series so great.

When Mass Effect 3 came out, I took the successes of the game to mean that the JRPG was obsolete. The genre was born with Dragon Quest to textually represent concepts that were too graphically complicated for the NES's eight bits, but twenty-seven years later we don't exactly have that problem anymore. (On that note, menu-based RPGs are still finding some popularity on handheld devices, which remain partially bound by these limitations.) ME3 revises the systems of its Japanese antecedents with a highly effective show-don't-tell attitude, streamlining combat and character development elegantly. Do you miss combat menus? They're there, but only when you need them to be. Bummed at the presence of skill trees instead of vital statistics? They fulfill very similar functions when you think about it. This quickened approach is in line with what the populace has come to expect from video gaming, but there are few titles that have managed to combine this satisfying sense of speed and immersion with the robust micromanagement that made these games so appealing in the first place. That's the sweet spot Ni no Kuni hits. 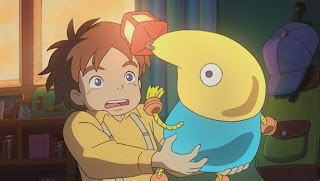 Ni no Kuni, the heir apparent to Pokemon's stale grasp on the creature collection throne, gives you 308 total "familiars" and their evolutions to play with. They each have six battle statistics, which you can enhance through individualized equipment sets and treats. Familiars also have unique movesets which can be modified through the use of gems. The potential for variable manipulation is staggering; gameplay systems are far more flexible and rich than Pokemon, encouraging the sort of maximization that made the JRPG distinct in the first place. The fruits of your labor are tested in fast-paced menu combat that also includes free movement, representing the finest convergence yet of unrestricted gameplay and JRPG mechanics. The lack of a multiplayer in which to enjoy this battle system is a shame, surely a casualty to contemporary developers' "wait for the sequel/DLC!" attitudes.

Sweetening the deal further is the remarkable aesthetic of the game. Much mention was made of Studio Ghibli's involvement with Ni no Kuni, and the results bleed into just about every moment of the game. Joe Hisaishi's score is phenomenal if a bit limited, and the titular other world is bursting with lushly realized personality. What can I say about it that a trailer for the game can't?

Unfortunately, all of this splendor comes with its share of caveats. If you've taken the time to play a creature collection game, chances are that you'll want to collect a majority of the creatures. Because the process of actually acquiring a familiar is totally random, it can often be both time-consuming and very grindy. I completed Ni no Kuni with about 3/4ths of the familiars, a sixty hour playtime, and characters at level 70+. Fairly early into the game, my compulsion to raise an army of funky beasties caused me to become way overleveled, which renders the game a cakewalk. Though this game's demographic skews young, the developers should have nonetheless anticipated that fans of the genre often have a compulsion toward completism, the end results of which should not detract from the difficulty curve this severely. Also: sixty hours! I'm not even sure where I found all that couch time. It's a pretty standard number for a JRPG, but there's a degree of challenge in sustaining a compelling universe for that long. About forty-five hours in, I found myself checked out of both the world of Ni no Kuni and its admittedly simplistic story, which is seriously disappointing. Part of this comes from the game's propensity toward fetch quests and flabbiness, a result of keeping the affair simple enough for a younger audience, but the importance of your presence diminishes after the fiftieth person whose enthusiasm you're tasked to restore by opening three different menus. There comes a time in any game of this length, no matter how compelling, where you're reminded that the universe thus created is merely there to sustain the gameplay. If the gameplay is repetitive, then by extension the universe grows repetitive as well. I had to remind myself not to be so jaded about something so gorgeous, and to its credit, it reeled me back in during the last couple of hours. (Props for an ending that, though truncated, is sweet and simple and avoids cliche.) It's still a disappointing plateau to reach for a title that is marketed so heavily around its beauty.

The aesthetic decay pales in comparison, however, to the bevy of mechanical problems plaguing Ni no Kuni. These issues are often minor, but even the slightest of problems recur innumerably over the course of sixty hours, compounding the frustrations to the point where they actually matter. By far the worst is the dismal AI. Each battle gives you three human characters with three familiars each, but you can only assume control of one at a time. The computer takes the reins for the remaining two and, despite the presence of a very spare Tactics menu, they typically do their own thing. Allowing these fools their own agency means that they'll gleefully blow 70% of their MP during random encounters, or refuse to heal you when you ask them, or fail to defend against an oncoming haymaker, or force useless Esther to attack with her harp for a meaty 2 damage, or completely ignore elemental strengths and weaknesses, and so on. Worse yet, the pathfinding is dismal - watching a computer-controlled Tin Man walking in place against a boss for three seconds before deciding to attack is likely one of the most heartbreaking moments I played through. Possible solutions: a greater degree of human control over your allies, or a highly specified means of programming their actions, akin to the Gambit system of Final Fantasy XII. Other problems during battle include its penchant for stopping in its tracks whenever someone uses an ability that targets an entire party, an inexplicable creative choice that kills the impressive momentum of the battles. It's not merely an annoying delay, but a way of giving your enemies artificial leverage, since your oncoming attacks are interrupted by these cutscenes but theirs are not. When a bulk of a game is its combat, it seems a shame that there are such easily remedied problems with it. One pass through playtesting would have been enough to tell that no, it's not a good idea to stop combat for ten seconds to inform us that our Evasion has been lowered.

Picking at every flaw I can find in this capacity may seem petty, but the JRPG has become emblematic of Japanese gaming's inability/unwillingness to innovate itself in today's culture. You can only suck yen out of otaku with lazy moe for so long. I'm only as harsh as I am on Ni no Kuni because I think it's the best representation of its genre in a long time, and its issues may be multifarious but they aren't coded into the fundamentals of the gameplay. There is potential for greatness in this lineage, especially if the narrative matures alongside the young audience that Level-5 is so obviously trying to court. Consider this a recommendation to disenfranchised Pokemon fans, weary JRPG veterans, or anyone with several dozen hours to burn on a spectacular display of sight and sound.