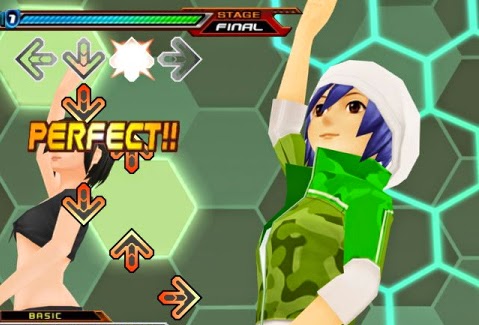 I was in the throes of a strange adolescence when I fell in love with these songs, and I do not have the musical vocabulary to reason through my choices with anything other than free association and reactionary sentimentality. Proceed with caution.


10) Jenny - Do You Remember Me
Original: Not sure - I read many years ago that this is a cover of a Japanese pop song from the 1970s, but I've since learned that the Internet isn't always a trustworthy place.
First appeared in: DDR MAX (6th Mix)

My friend and I played this at our joint 16th birthday party and my mom told me that I should turn it off or people would start leaving. WHATEVER. For some reason, this song always stuck out amidst the deluge of generic Eurobeat that slammed DDR some time around 5th Mix. It may be Jenny's subtle ESL cadence ("I am gonna g'you a start"???), or that her vocals are tender in a way that the genre rarely manages, or its ridiculously fun Heavy stepcharts, but Do You Remember Me has a lot of personality. I think most people skipped over this song because it was super girly and Dance Dance Revolution is all about looking as cool as possible.

9) Jennifer - If You Were Here
Original: None
First appeared in: 2nd Mix


For better or worse, this song screams DDR. Most people familiar with the game would probably cite smile.dk's Butterfly as the franchise's most notable contribution to popular music, but let's be real - Butterfly is annoying as hell. If You Were Here serves up twice the synthesized Italo Disco goodness with only half of the shrill vocalizations and none of the dubious Orientalism; it's a perfect little encapsulation of the cool-uncool divide that Dance Dance Revolution spent so long trying to navigate. Strange that (if you choose to believe the online whispers of yesterdecade) the opening 13 seconds of this song inspired Naoki Maeda to write MAX 300, the series' first definitive step away from its dance game pretensions.

8) Anquette - My Baby Mama
Original: None
First appeared in: Solo 2000

As far as I can tell, this is the one instance of female rap in the pre-Supernova history of Dance Dance Revolution, and what a hilarious one it is! Solo 2000 had a pretty odd tracklist - lots of R&B, lots of pop, and a generous helping of rap, which reads as an effort to further inch in on the still-reluctant American arcade scene. This is the clear standout, though, a contemporary tale of infidelity that must have been a huge hit in Japan. I could understand playing through this song unperturbed if you didn't understand English, but performing DDR's bastardized shuffle-stomp dance to a woman angrily rapping about 2 Live Crew and sexually transmitted diseases was probably a bridge too far for players on these shores. It never crawled out of Solo 2000 hell when it clearly deserved to over Sexy Planet or any other mindless Konami original; it's the kind of idiosyncratic Dancemania selection that highlights the franchise at its best.

This isn't the last of the inane Dancemania Europop. But almost! If you can't bring yourself to tolerate tooth-rotting synths and garbled English, then why are you even reading about DDR in the first place? If You Can Say Goodbye sort of gets lost in the 3rd Mix shuffle, since this was when E-rotic showed up and got all the attention for doing essentially the same thing as every other SAIFAM artist except with tarty sex lyrics. E-rotic is fun, but Kate Project is earnest dance music, the sonic equivalent of a headbutt: lyrics simple (ridiculous) enough to stick with you, a stirring harmony in the chorus, and Kate's ability to rhyme "do" with itself without wavering add up to another song that deserved more attention than it got. I could see this being popular for a few weeks at the turn of the century, if only the club scene were so kind to all those anonymous Dancemania divas.


Rap in DDR should be treated as a series of noises, meaningless syllables for you to hammer steps out over, except for Anquette's unimpeachable flow in My Baby Mama. Konami's music supervisors have a tin ear for rap, whether purloined from Dancemania or churned out in their own nightmarish studios. I've probably listened to this song seventy times in the 12 years since DDRMAX2 came out and I still have no idea what the hell this guy is talking about. Something maintaining the game the fame something something. But the chorus still soars, full of a verve that two passes through the dance music cover-industrial complex can't suppress, and the verses remain palatable despite the efforts of a man who got paid 200 bucks to poorly rap over some electro. It was also the first song on the selection wheel in DDRMAX2 so you could pick it really quickly to troll people.


Club Version is a crazy-ass mess. If there's a club in the world that comes close to replicating this installment's melange of laughably cheesy R&B and techno so aimless that it practically feels improvised, I'd sure like to go there someday. That's not to say it's bad - it certainly has more character than many of the tracklists from DDR's twilight hours, and there are a few real standouts once you've sifted through the filler. I just doubt that anyone from Konami has actually been to a club. Patsenner may not seem like much at first blush, but there's a curious depth to its sound, one you wouldn't expect from a song that so shamelessly uses the woodblock. It's unfortunate that Konami forgot this song existed after Konamix in 2002, although a ninety-second long ambient electronica track called PATSENNER was probably doomed to become DDR apocrypha from the start.

4) Hi-Rise - I Believe in Miracles
Original: Jackson Sisters (1973)
First appeared in: DDR for Playstation as a preview for DDR 2nd Mix


I only picked this song because the play button appears right where the guy's third eye is.


Burning Heat stands tall as one of MAX2's centerpieces, a flashy ode to Konami's flagship franchise that has the effect of stressing the utter nerdiness that goes into playing, and surely creating, DDR. It's a video game...in which you can dance...to a video game song! Finally! Self-reference in the gaming medium tends to be a huge hit, since most gamers love when their obscure obsessions are validated, and Burning Heat's cumulative 100,000 views on Youtube indicate a legacy that few other songs from DDR enjoy. The song itself doesn't hurt, propelled by hotblooded space adventure synths at 166 BPM and featuring a perfect little 8-bit transition that probably blew a lot of teenage minds in 2002. Pretty embarrassing for Naoki to produce this kind of big-beat electronic synthrock four years running for DDR and then to get so soundly beaten at it by a relative newcomer.

Here's an 100% nostalgia-driven selection - where songs like If You Can Say Goodbye and My Baby Mama stuck with me after playing them perhaps once or twice, My Sweet Darlin' became a fixture because I played and listened to it obsessively in my sophomore year of high school, when I still wasn't sure what music actually was. That swelling synth line combined with the brisk, bass-heavy production is like catnip to me. Wildside also achieves here the dubious distinction of being one of the few SAIFAM artists whose English diction actually improves on that of the original singer's. (This only makes their massacre of Sylvie Vartan's Irresistiblement in Extreme that much funnier.) Yaida Hitomi was a great fit for this genre, since her fast-paced and terminally upbeat Engrishy J-pop takes kindly to the drum machine. The stepchart is also really fun and there's a super adorable freestyle to the song by a person who called himself Lil B. The only way it could be any better was if it was actually Lil B performing said freestyle.


Sanae Shintani was with Konami for their very first Beatmania game, and from the radiator they chained her to she sang in over 80 more of their songs, 30 of which she wrote or co-wrote lyrics for. She has a mellow, distinct voice that isn't powerful or compelling enough to overpower her accompanying productions, granting her an anonymity vital for the massive range of genres she performs in: pop, house, trance, hard techno, bossa nova, ambient, folk, and if you subscribe to Konami's in-game genre labeling, "fever hero ending," "mandolin step," "lovely," and "quilt." (This song is "Mondo Cuban.") She turned in a few good performances throughout her 13-year Bemani gig, but the vast majority of her work is just that. Sana Mollete Ne Ente catches Shintani having an atypical amount of fun, considering Togo's embarrassing double-entendres about playing Bemani games and her boyfriend's "secret finger technique," not to mention the lethargy of the arrangement itself. The BLT Style remix doubles the speed and throws in a shitload of percussion, giving the melody an energy that complements her own. I'm sure this is pretty cheesy when placed alongside non-commercial samba music, but there's spirit to be found in the way Shintani rolls the r in rumba or the muted discordant horns, made twice as noticeable by the persistent rumbling of the drums. It's a shame that this song arrived to DDR during the franchise's death knell, likely unappreciated amidst the increasingly homogenized roster of Top 40 that Konami desperately tried to court audiences with. We'll always have IIDX, Sana.