The Master: Bring Your Own Paint Thinner 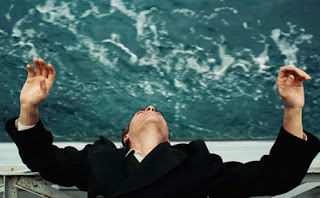 There Will Be Blood was the first P.T. Anderson film I'd ever seen, way back in 2007, and it knocked me on my ass. I was enraptured. Five years and six views later, the film shows a little wear and tear: as if he lost faith in his audience and their ability to capture his themes, Anderson hamstrings the film's subtle thematic buildup with a few bloated expository passages, but by and large, it is an experiment whose vibrancy and darkness and insanity I cannot help but surrender to every time. In that regard, I have to wonder if the critical reaction to The Master serves as a publicly visible inflation of my own experience. Perhaps it's all the collective gushing of a group of neophyte movie reviewers who saw There Will Be Blood and loved it and are trying to prove as fast as they can that PTA's newest work is, yes folks, a masterpiece, you read it here first. Probably this is lazy conjecture.

It would be unfair to compare The Master to There Will Be Blood, but only on the basis that I am a biased party. The films don't seem particularly similar at a superficial level, but Anderson seems to be operating on a newfound template, which is sort of an unpleasant discovery. Lush, shadowy set design and lighting, courtesy of Mihai Malaimare Jr.'s best Robert Elswit impression. (The film is gorgeous, its art direction likely its sole inarguable asset.) Discordant Jonny Greenwood score. Brutal runtime. Exploration of two perverse, wretched human souls in combative waltz with one another. Operatic acting, pitch black comedy, inscrutable behavior, the religious-industrial complex, all forced down with a chaser of extreme nihilism. The primary difference between the two is The Master's increased presence of women, though with the exception of Amy Adams they're mostly sex objects for the depraved protagonist. I would swear up and down that these are sister films, or perhaps the first two parts of a "Broken Man Trilogy," and there's nothing wrong with either of those possibilities. It just seems a shame that a director who has spent the better part of two decades cultivating a wildly diverse, bizarre filmography would then spend five more years reining himself into a relatively constrictive aesthetic box, taking two different approaches to fundamentally similar thematic material and then homogenizing them. 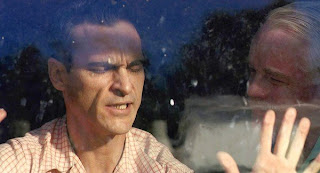 Our guide for Anderson's next plunge into the depths is Joaquin Phoenix as Freddy Quell, a man in his darkest hour. He drinks paint thinner, chokes rich white dudes, and sleeps indiscriminately with woman after woman until he meets The silver-tongued sociopath Master himself, Lancaster Dodd. Dodd, embodied by the perfectly cast and thus somewhat predictable Philip Seymour Hoffman, spearheads a pseudoscientific system of belief called The Cause, which is aimed at using hypnotherapy to induce a sort of time-traveling euphoria in its charges and cure them of "past traumas." The mechanics of this are repeatedly debunked throughout the film by skeptic and believer alike, to which Dodd reacts with manic rage and tips his hand as A Very Irrational Cult Leader. Not that I'd want to deny anyone the visceral thrill of watching ol' PSH spit "pig fuck" at someone, but it's a pretty lazy way to connect the dots. Quell and Dodd are both men of extremes, men who lash out at everyone around them when their backs are to the wall, which we are shown again and again to decidedly diminishing returns. The execution is on point, as always, but this is the first time I've ever watched a PTA movie and found myself wishing for a less lenient editor. Assault me once, shame on you, assault me twice, shame on me, assault me thrice, cut it out already... 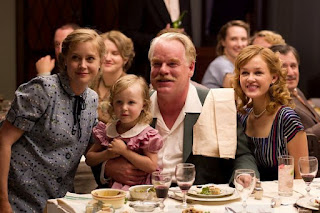 This urges the question of what I would have preferred to see in the place of all this excess, and honestly, I don't know. The film is spare despite its length, and ultimately all it says about religion is that it fulminates in damaged souls and simply leaves them as damaged souls trapped in a dogmatic hivemind. If you're looking for a scathing anti-Scientology screed, something to fulfill all those Internet rumors of its troubled production, the film issues no direct attacks on the religion itself and simply makes a few metaphorical feints at generalized cult practices. Sure, you have the insane "applications," and Dodd's raving inconsistency, and the repeated pittance of The Cause against any sort of rational thought, but these are all things that anyone watching this movie likely knew about cult belief in the first place. 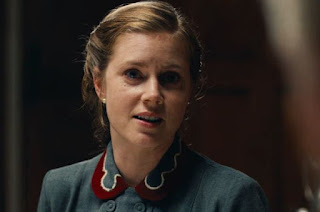 The argument could be made that P. T. Anderson was aware of all this when he made the movie - how couldn't he be? - and that the movie is not about what it is, but what it is not. That's a tough justification for something as aesthetically charged and zealously acted and SIGNIFICANT as The Master, though. Sure, it's a character study of two men caught in behavioral, psychic, ideological circles. But two and a half hours of beautiful, weighty nothingness, whether intentional or not, is going to come with its advantages and its caveats. The movie casts an obfuscating haze about itself and its motives, offering plenty of opportunity for continued study and appreciation, but also rendering what it really wants to say indeterminate. I don't know what it is; I wrote this review hoping I could decipher it in the process but I didn't. I would recommend seeing The Master, but for selfish reasons, because I just want people to talk with about it. To see if there's something buried deeper that I haven't found yet or if it's just hot air.