This is an entry for Final Girl's SHOCKtober 2012 blog event. As always, thanks to Stacie Ponder for being such a creative inspiration/badass!
Minor spoilers.
It can sometimes be hard to be a science fiction fan when you know so little about science. I love when sci-fi explores setting, and character, and ethical ramifications through the prism of ever-expanding scientific knowledge, but when it comes to actually analyzing the veracity of the material itself I am hopelessly lost. Maybe someday I'll teach myself enough to crawl through a movie like Sunshine and either be able to validate the basis of its plot or find myself horrifically disappointed by it, like this guy.
I was gearing up to write a gushing, effusive piece about the movie, mostly because I really do enjoy it and I think it remains criminally underseen and mismarketed. And then I went ahead and read that, which is so detail-oriented and thorough to be nearly psychotic, and all of a sudden the seeds of doubt have been planted in my timid little soul. Not that I need the validation of some angry man on the Internet to like or dislike something - the hive-mind mentality of popular criticism is awful enough as it is - but Sunshine repeatedly employs fact as a scaffold for narrative and to be told that those facts do not hold water makes me a little nervous. And though I don't agree with all of his myriad complaints, I have to give him credit for some pretty keen-eyed speculation on the contradictory nature of the technological future the film creates. His analysis of the film's internal logic, predictive though it might be, cannot be reasonably challenged by someone like me who just doesn't know these things. Ignorance is bliss, after all.
If you're science-oriented, and you have the wherewithal to really dismantle what you see in this terminal voyage to the sun, I recommend viewing the film as a sort of cautionary parable. "What Can Go Wrong in Space?" or "Don't Let the Crazy Dude Be Your Navigator." The crew of eight that Danny Boyle puts together is a doomed lot, and befall them doom does; shield malfunctions, inopportune fires, inter-crew drama, and then a completely unexpected wrench thrown in during the last half hour. The movie takes a hard left into science fiction horror at this point, like a competent version of Event Horizon, and a vast majority of the people who watch it are dissatisfied with this. I think it represents a logical capstone to a journey where not only does everything that could go wrong manages to, but things that could never have conceivably happened at all still manage to happen and fuck them the hell up. It is horror at its essence: being confronted with the incomprehensible. I don't expect everyone to buy this justification, but it works for me. 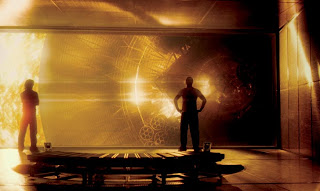 Even if the film ends up disappointing you in its final act, the first hour is taut, eventful, and full of beautiful imagery and sound. Made on a relatively modest budget ($40 million, which it couldn't even make back internationally), Sunshine nonetheless looks and sounds fantastic, embracing its slightly over-the-top space opera status with booming orchestral music and blown out golden light infused into nearly every scene. If self-importance is detrimental in the face of incompetence, then I suppose Sunshine would be a grievous offender to reviewers like the above: the movie does, indeed, make itself feel important. I can't even say that I consider it particularly important, despite being a fan. It is a flashy, engaging little trip down the mortality rabbit hole, however, and ninety minutes of that will satisfy more than its share of sci-fi fans.
B