The 2012 Horror Digest, Part 2: Whatchoo Know About the Ladies? 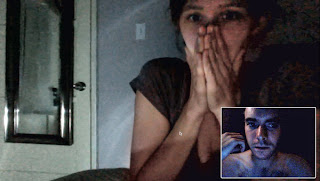 For those unfamiliar with this odd little bauble of a horror film, V/H/S is a horror anthology shot entirely through lo-fi recording devices: handheld cameras, miniature cameras stuffed into inconspicuous places, webcams, and the like. If this sounds exhausting to you, it occasionally can be, and I must admit that the last half hour or so felt to me like the longest, most hellish Skype session in the world. Also disappointing is the movie's terrible treatment of women, each one of whom becomes a slut, an idiot, a depraved murderess, or all three. If you can hurdle past these admittedly damning issues in ideology and construction, however, there's a lot of V/H/S that actually works really well. The cryptic, muddled nature of the visuals often makes what's happening on screen indecipherable and, in pairing with the strong sound mixing, quite frightening. Terrible things are constantly lurking where these obsolete, low-end cameras just can't seem to capture them, and that spirit of suggestion is deceptively powerful. Most of these stories, each assembled by a different director, are pretty compelling, and despite a tendency for them to end with resolutions as unsurprising as "and then the evil killed them," they held my attention consistently (short of a couple of dogs). Recommended with hesitations; it leaves a bad aftertaste. B- 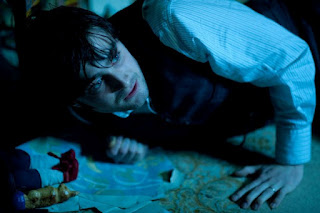 The Woman in Black

There's a really excellent period in the middle of The Woman in Black where Daniel Radcliffe, staying the night in a spooky house while examining some sort of important legal document, is besieged by a series of supernatural occurrences. The scene takes place over the course of about five minutes, but in almost complete silence - no music, no dialogue, just the creaking of the house and whatever cackling apparitions fall upon him. Five minutes doesn't sound particularly impressive, but the scene's impressive momentum packs more horror content into those five minutes than probably any other period in the movie. I have long loved haunted house movies like a child, and that's probably why I stuck with this otherwise fairly cut-and-dried genre effort as long as I did. It's not that the movie is bad at all, but there's very little here to get excited about. Radcliffe offers little as a sad lawyer-dad with mutton chops, the plot came from The Innocents' fifty-year-old ghost matron afterbirth, and a majority of the scares are admirable for their reservation but typically fall flat. Nothing here is offensive or incompetent, but in an almost totally undistinguished Gothic horror, it might have given me something to talk about if there was. C+ 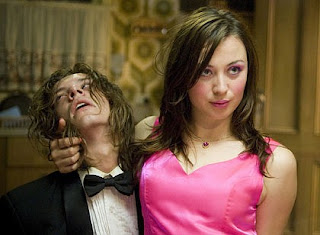 Australian horror is a blip of a subgenre, but one that I feel deserves more attention. My experience with it, admittedly minimal, extends to the harrowing Wolf Creek, the mournful yet potent Lake Mungo, and this bizarre little teen movie. (Also Black Water, but the less said about that bullshit the better.) The Loved Ones is at once a dysfunctional family story, a teen film replete with rejection and angst, and a nasty, inventive horror/torture film with some really fun campy acting. The film embraces both its brutality and its slight goofiness, creating a satisfying middle ground where it's both in on the joke and taking it to unexpected places that make you feel a bit uncomfortable. The music and its uses thereof are especially interesting - music in teenage-centric films is often underutilized or ignored as an expressive tool, but The Loved Ones employs it exceptionally well. The only real problem here is that the ending is bunk, an unfortunately predictable note that doesn't offer anything particularly new or insightful to the film. Kudos for showing the restraint to not write an over-the-top twist ending, but a little bit more would have gone a long way, you know? B 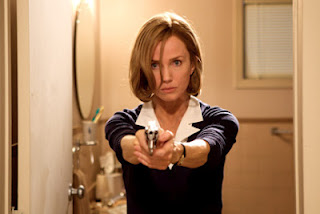 This is nasty schlock, the sort of controlled and quietly self-aware dumbness that I feel the overwhelming need for every once in a while. I can't really claim this as anything other than a gratuitous, violent, kind of shitty "and then there were none" body count flick, but the execution and cast are committed and the gore is great. It runs for nearly two hours, which is absolutely unnecessary and by far the biggest problem with the movie; you could trim twenty minutes off easily when you take the redundancy of certain scenes into account. Pitting two friends against each other in a duel to the death is intense, sure, but definitely loses a lot of the punch the second time you see it. Kind of diminishes the creativity of the villains, you know? Not that they have much: three of the main baddies are brainless lackeys, barking like dogs and flexing ruthless authority without the aid of the titular Mother herself, played to the hilt by Rebecca de Mornay. She's MIA for the first half hour of the movie, and upon her arrival, it changes from a conventional prisoners-in-their-own-home horror story to a psychological, neurotic, gendered power game. The sexist implications of the monster mom trope are present and arguable, but Mother's Day at least attempts to say something interesting about them. Whether or not it succeeds, though, is ultimately auxiliary to the trope's role as a conduit for carnage. And carnage there is. B 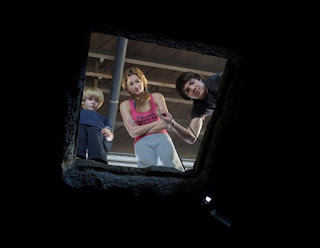 Joe Dante has been making odd, fun, mostly youth-oriented films for the better part of three decades now, but nearly all of his output remains firmly rooted in horror. The Hole, his first theatrical release in nearly ten years, was finished in 2009, trapped in very limited circulation, and finally dumped into cinemas with minimal fanfare or attention. It's easy to see why it received this treatment, as the movie is low-budget, the effects are cheap, and the movie is too tame for adults yet too menacing for younger children. It hits a really satisfying spot for young adults, though. What separates it from the similarly intentioned but far less competent The Moth Diaries is its careful synchronization of theme and character. Manifestation of latent fear is by no means an original horror concept, but The Hole demonstrates a surprising amount of restraint about it by exploring the most superficial one at first (the youngest character's fear of clowns) and then slowly layering on elements that point toward each other character's fears until the time comes to actually implement them. The movie is paced with pinpoint accuracy, and handsomely crafted despite its obvious budgetary limitations. This is personally not for me, but it might have been eight years ago, and if you have any younger siblings with an interest in horror this will definitely hit the spot more satisfyingly than The Moth Diaries. B-
Posted by Drew at 5:01 PM

Email ThisBlogThis!Share to TwitterShare to FacebookShare to Pinterest
Labels: 2012, Horrors