Egress from the Winter 2013 Graveyard, or Finally Some Interesting Movies Come Out 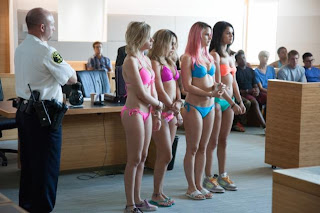 Spring Breakers
Try as you might to disassociate yourself from the parts of Spring Breakers that have already entered our cultural consciousness - Disney bikini ass boobs murder gun fellatio piano James Franco??? - there's really not much else to the movie, so you kind of have to accept its lack of substance out of the gate. It is almost totally repetitive, probably a deliberate decision when you take Harmony Korine's enfant terrible status into consideration, but there's a method to this droning madness. Korine's subjects are four girls who flee college toward this soulless liturgy of party-party-party-party-party, under the pretense of "finding themselves" and "changing their boring lives." That this is achieved through scene after scene of constant drinking and carnage, all set to a Skrillex soundtrack, is a fairly transparent irony. But Spring Breakers has a sneaky streak, realized primarily through the fates of these young women. These supposed heroines are delinquents in training, securing their travel funds by robbing a Chicken Shack with sick ferocity. They knowingly exert seductive power over local crime lord/hip-hop demicelebrity Alien, played by James Franco with a degree of conviction that suggests actual interest in this project. And if Franco is involved and intrigued, you can only imagine what kind of raunchy, dopey, entry-level Social Welfare 101 nonsense this unholy alliance will birth. He and his cohort stumble through a series of bizarre events, all linked by the connective tissue of booze and tits on the beach of St. Petersburg and all ending in totally unexpected ways. When the end finally arrives, seemingly half an hour too late, he and the girls splinter from each other in unexpected ways in a climax designed for neither a vindictive nor a sympathetic audience. Selves are found, lives are changed, but these inevitabilities are livened by the details. Harmony Korine's message may be somewhat obvious, but his delivery is not, and the thumping machine that is Spring Breakers chugs on regardless of what anyone thinks of or expects from it. B- 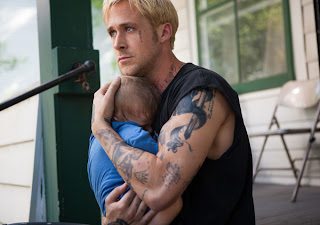 The Place Beyond the Pines
"Ambitious" is a loaded word in criticism. Are the failings of a work of art excused, at least in part, by the force of the ideas behind it? I don't believe that any positive step toward development, whether technical or didactic, should be immediately dismissed on the basis of being part of a flawed product. A viewer simply has to cope with the disappointment of potential tarnished by execution. For some, The Place Beyond the Pines might carry the hallmarks of a film that attempts too much and accomplishes not enough. It's a crime drama divided into three parts, each focused on a different central figure: the criminal (Gosling), the lawman (Cooper), and their sons (Chronicle's excellent Dane DeHaan and Smash's not excellent Emory Cohen) 17 years later. Over the course of this 140-minute triptych, director Derek Cianfrance piles issue after issue onto his plate, lifted from realms legal, ethical, fiscal, genealogical. It has become increasingly apparent after last year's cinematic glut of overlong, tedious drama that film may no longer be the best medium to attempt such complex realist narratives, and The Place Beyond the Pines' inability to sustain all its ideas into and through the third chapter keeps it from true greatness. It is by this point, though, that we are expected to shift our focus alongside the film. Its final act is mediated by teenagers, totally unaware of the sins of their fathers. Why would all of these societal ills matter to two clueless youths, trying only to survive? Perhaps the most disturbing aspect of the movie is how its panoply of moral ambiguities are passed down in the form of simple rage over the course of seventeen years. To most viewers, this distillation will be a loss, as a series of intelligently explored themes (and some pretty sick motorcycle stunts) falls by the wayside in favor of their aftershocks. But there are rarely clean, satisfying conclusions in real life, and The Place Beyond the Pines is bold enough to align us with the two characters that come to realize this the most. B+ 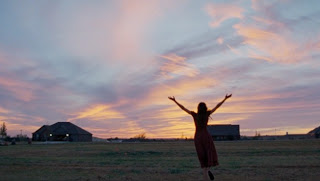 To the Wonder
Terrence Malick's trilingual dissection of romantic and sociological strife, his first attempt at tackling contemporary existence since Badlands, doesn't necessarily deserve the critical scorn that it's attracted since its debut at the Venice Film Festival. Malick's intuition for the filmed image makes it impossible for him to produce something truly bad, because even in the face of complete thematic and executive collapse, the man can still produce a hundred reminders of why we watch movies in the first place. To the Wonder does a disservice to his virtuous grasp of light and framing by putting Ben Affleck and Olga Kurylenko in the lead roles. Kurylenko is fine, but she's less of a Jessica Chastain or a Sissy Spacek and more of a Brooke Adams, an adequate muse for her director that doesn't bring a lot to the table. Affleck is the real speed bump here. It's not that he's a terrible actor, but he is generally an inexpressive one, and a lead man who can't quietly communicate Malick's intangible notions of ecstasy and torment is a death knell both to himself and his film. Admittedly, this is a tall order, but Brad Pitt rose to it despite a similar set of skills and limitations. Affleck looms and glowers and hopes that it can all be cobbled into a watchable performance in the editing room, which it was not. Because Malick refuses to delineate his concerns in conventional narrative terms, instead tethering them to a complex aesthetic treatment and observing the way people react to them fly-on-the-wall style, the lack of reliable human avatars leaves all of this bombast unable to find a sufficient release mechanism. To the Wonder isn't inscrutable, but it is definitely unfocused and hazy, a dubious follow-up to The Tree of Life that only seems to further arm Malick's recent detractors. C

Trance
Danny Boyle's newest effort is fun, silly stuff, a Day-Glo take on Inception where people are hypnotized by the word "strawberry" and a shaved pubic mound is a major plot point. Flitting in and out of induced daydreams, this narrative lacks the temporal and spatial clarity that kept some semblance of order to Inception's top-heavy universe. It's easier to forget that Trance is a fairly ordinary heist flick when you're busy sorting out Boyle's willful obfuscations, and eventually it feels as if the film's submersion into metaphysical psychological architecture is simply a way to shuffle a familiar deck. But the energy is high and the actors are game (especially Rosario Dawson, excellent as a implausibly superpowered hypnotherapist), so the loftiness has a positive charge to it. One could never accuse Boyle of wanting to be inert, and he has a talent for maintaining rhythm even in technical or expository speech, so he never lets the heaviness of the story get away from him for too long. Still, Trance is disappointingly safe, even within a series of greater possibilites. B-
Posted by Drew at 8:12 PM