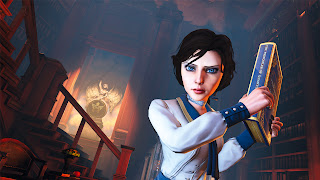 Bioshock Infinite, Ken Levine's newest stab at bringing some life to the AAA gaming landscape, has spent the last month enjoying impressive critical and public acclaim. As a game, it is a machine as well-oiled as you could hope to ask for, a first-person shooter etched from thoughtful gun combat and a Vigor system that complements it stylistically and ludically in equal portions. There has been some streamlining, but we're in a gaming climate that streamlines as a matter of course, especially by a franchise's third iteration. Narratively, Infinite hosts a plague of discontents, ameliorated partially by the game's insistence on exploring them through the story's subtext. To simplify drastically, Levine claims through Infinite that narrative video gaming will always be subject to a series of technological restrictions. It's a wonderful idea for a game to grapple with, but it doesn't always work out. Leigh Alexander has done an excellent job at delineating some of the friction that Infinite encounters as a narrative-based game, but some of her arguments are predicated on the notion that the original Bioshock unified narrative and gameplay seamlessly. It is unrealistic to expect every act of brutality in a game of this genre to maintain a sense of commodified mortality; for all that atmosphere and all those piquant Objectivist flourishes and all the hullabaloo about “Would you kindly?”, the first iteration is still a game where you mow down underwater zombies in the hundreds. 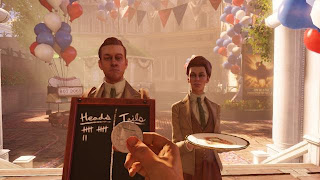 Bioshock Infinite takes on the enormously ambitious task of taking a diegetic stance on one of the greatest challenges a game developer faces today. The mantle fell on the series almost by default, as it has never been shy about accepting and exploring its status as a video game. Bioshock examined the business of being a man without a choice, much like a player confronted with a static set of outcomes, and Infinite further posited choice as a universal mutation that nonetheless results in one fixed point. The fixity in Infinite means that Booker can't advance toward his fate until you accept that baptism, rescue that girl, walk through that tear – Levine argues that the meat in between is where we gamers are expected to get our fill of “choice.” His viewpoint is not strictly compromised by its adherence to standard video game mechanics, and though the integrity of his thesis is occasionally undermined by frayed threads (uncomfortable cinematic glitches, the incorporation of the Vigors, the game's struggle to unify Columbia's political climate with its subtextual commentary), Levine still accepts and essays his limitations through a medium and genre that aren't exactly ideal for hosting them. Bioshock titles may have important things to say, but they're still games, something that Levine makes no apologies for.


Assessing the technical boundaries present in a creative mode calls to mind 1895's cinematic keystone Arrival of a Train at La Ciotat, a movie that historians claimed caused audiences to “leap out of their seats in horror” as they saw a train barreling toward them in robust 16 FPS motion. We have the blessing of retrospection, and it seems much more likely that these reactions were reflexes to the excitement of watching. No one went to this movie thinking that a train was actually going to hit them. With video gaming, we have yet to reach such a common point of understanding; indeed, the promise of virtual interactivity has apparently short-circuited the notion that this medium also has its limits. 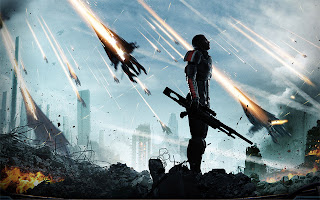 But Bioshock Infinite, for whatever reason, eludes the hatred that Mass Effect 3 received for its supposedly choiceless ending. The Mass Effect saga was a fully serialized collection narrative released in three installments over the course of five years and scaffolded by DLC, books, comics, and an animated film. Expectations quickly coalesced around the release of the third and final title, and players were disappointed to learn that apparently pivotal decisions made in the first two games had a minimal impact on the third. Oftentimes these decisions were translated into either War Assets, an abstract number determining your success in the unplayable final battle, or sidequests, which typically just gave you more War Assets. Disappointing, to be sure, but it pales in comparison to how the game handles its actual ending – three choices, marginally informed by your moral standing but remaining the same except for a few extra cinematic seconds. To many outraged fans, it became less about the content (mostly satisfactory, though rushed), but rather a concrete sense of entitlement to three vastly different endings based on careful calculations of how they played through an 100-hour epic. This is untenable for a multitude of reasons: budget, plot and story consistency, perceived differences in ending quality, and so on. And thus, as in Bioshock Infinite, the pervasive specter of “choice” ultimately proves itself as a means to an end rather than an end itself. I think Mass Effect 3's ending is the closest thing a widespread gaming audience has had to its Arrival of a Train moment, where the shortcomings of a new mode of experience finally became apparent; the game thereby fell on the sword for the likes of Infinite, an entry in a series similarly preoccupied with man's many paths but offering even less conclusive variation. 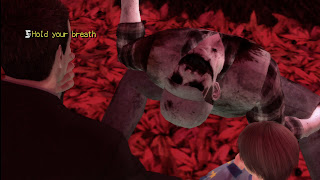 Evaluated through audience reaction or objective criticism, neither of these games was entirely successful in reaching its goal. And because of the myriad complications present in programming a game, let alone a hundred-million dollar game, it's not likely in this generation that developers will be able to bridge gamers' notions of agency with a multi-forked preprogrammed narrative that molds itself to their decisions. I have never been bothered by video games with only one ending, as I feel this approach gives scenarists the greatest degree of freedom to design the story they want to tell. In this regard I think Deadly Premonition, though certainly rife with flaws, offers a satisfying middle ground between choice-driven story development and a focused creative vision. Deadly Premonition is essentially a Twin Peaks ripoff, isolating one schizophrenic FBI agent in a town full of eccentrics against the backdrop of a recent murder. But its scope is huge, much more than Bioshock Infinite or Mass Effect 3, and nearly all of the content offers a fuller picture of the town of Greenvale. Interacting with your surroundings beyond the most basic parameters of the plot is typically left to sidequests, fifty in number, generous in length, and every one offering some fragment of insight about the game's fascinating universe. Deadly Premonition encourages you to take time and dig deep into this town's network of secrets not only through world building, but also in-game rewards and explicit player encouragement. Agent Francis York Morgan, in dialogue with his alternate personality Zach (you), repeatedly stresses that you should take as much time as you need to uncover the secrets of Greenvale and its residents. Mass Effect 3 attempts a similar system that is rendered less effective by sloppy timekeeping (of course I'll retrieve your data disks from the cold recesses of space! What are Reapers?), homogenized quest structure, and that aforementioned sense of irrelevance when it all boils down to the one number that determines your sort-of-ending. Deadly Premonition's choices feel vital, especially because it's next to impossible for a first time player to discover them all; ME3's, though livened by the water-tight gameplay, are an obligatory vestige. 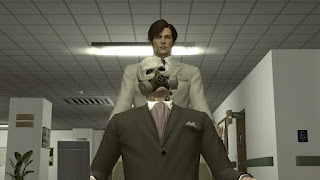 Stellar scenario design scaffolds Deadly Premonition's conceits about choice and the player, perhaps not as gracefully as Bioshock Infinite, but with a much more cohesive presentation of its ideas. Game designer SWERY is not shy about assigning you a role in the incipient events, assimilating you with Zach as soon as the game starts. The first scene is a black screen, York's voice calling out for Zach to wake him up. You do this by pressing the A button; York thanks you. From literally the first action you take, an actor-avatar relationship is established, one that progressively deepens with a series of insane one-sided conversations between York and “you.” To say much more would spoil the game, but SWERY has an equally salient point about player control as Ken Levine without such a defeatist prognosis. Infinite is birthed from a gallery of motifs, but one of its most prominent is the cage, Levine's concession that the video game medium is finite. SWERY views gaming as sprawling, sinister terrain, not without its boundaries but confident enough to operate comfortably inside them.
Posted by Drew at 7:43 PM