Top of the Lake: A Devil's Heart 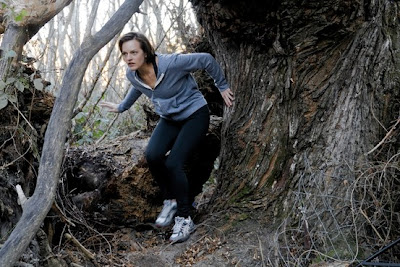 Top of the Lake is a mystery, in case you couldn't tell by that picture of Elisabeth Moss peering at some foul secret or something through the trees. Not that "mystery" tells us much anymore about narrative art, since any plot line by nature must have some mysterious elements in order to keep it compelling, but typically we associate it with a crime, suspects, motives, alibis...the whole collection of modular pieces that suit the needs of its storyteller's message. All of these elements are necessarily in service to unraveling or shading the central mystery, though a skilled craftsman can distract from this mechanical approach. Jane Campion's deft creative hand guarantees that Top of the Lake – equal parts rape-murder riddle, gender polemic, socioeconomic dissection, and character study – wobbles only minimally, despite the wealth of content on hand. A densely plotted six-hour miniseries brings outstanding attention to its swerves in storytelling, especially when they're as portentous as a bottle labeled “ROOFIES” or as inexplicable as a character being pardoned almost immediately for stabbing someone in a bar. Though consistently compelling, Top of the Lake is also noticeably sloppy, which ultimately diminishes the genre framework that Campion chooses to work in. 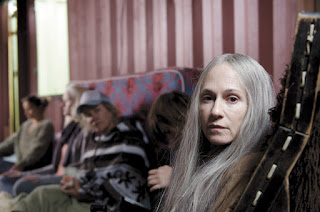 Instead, she applies her laser focus to creating the town of Lake Top and the community that has coalesced around it. Lake Top is impoverished, grimy, and hard, a town suspended in urban decay and technological obsolescence. It's the kind of backwater hamlet where a 12-year-old like Tui Mitcham is raped and impregnated and everyone turns their head out of fear. When she subsequently vanishes into the woods, Lake Top's police write her off as dead to spare themselves the trouble, leaving detective Robin Griffin to step in where no others will. The sole woman on the local police force, Griffin soon finds herself a ridiculed pariah, every aspect of her personal history made public to her peers and coarsely paralleled with Tui's so that she might see her feminine irrationality and forfeit this “lost cause.” Even the most resilient of women are marginalized and disrespected wholesale in Lake Top; they fade into obscure housewifery, scramble for illegal gruntwork under local magnate/shark Matt Mitcham, or if they're especially noncompliant (or “unfuckable,” in his acid phrasing) they find themselves ghettoized in shipping container colony Paradise.

Fortunately, Top of the Lake's discussion of gender retains nuance beyond awful men and saintly women. Lake Top is ruled by a crushing patriarchy; Campion has no pretense in depicting this structure as anything but what it is, an ideological spearhead led by walking mommy issue Matt Mitcham and enforced by his cadre of dim flunkies. The women, however, are completely at a loss for power or structure of their own. The closest they have to a leader is GJ (Holly Hunter chewing mad scenery), reluctant oracle of Paradise, who doles out cryptic advice with minimal surface usefulness. They have little to offer Griffin but empathy, as brokedown disempowered refugees in a town that allows them no escape or reform. The long and short of this gender dynamic is that no one is willing or able to help Robin Griffin except her on-and-off boyfriend Johnno, black sheep of the Mitcham clan who harbors secrets of his own. Elisabeth Moss displays a tremendous range of expression as Griffin, her face signposting every turn and slight the citizens of Lake Top heap upon her. Despite a dodgy accent (in line with Top of the Lake's established discomfort with its mechanics), she taps completely into both the cruelty of her surroundings and the turbulence that courses beneath her character. Noble, thorny, and real to the point of unease, Robin is exactly the protagonist this miniseries needs to give its arguments human context. 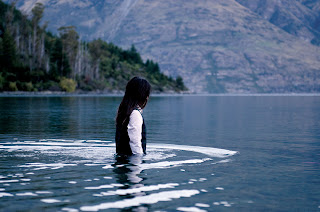 What makes Top of the Lake's examination of class and gender issues so resonant is its fully realized environment. Sexism, corruption and economic struggle don't simply exist in a bubble, visited on the Robins of the world by faceless oppressors. They stem from systemic reinforcement, enkindled by a community where behaviors that beget said moral ills are expected and encouraged. Campion's cinematographic preoccupation with her strikingly stark New Zealand setting leaves an even greater ache, as if to say how unfair it is that such a beautiful world should develop in such an awful manner. Even Lake Top's namesake, the centerpiece of this splendor, is subject to a Maori fable claiming that a "devil's heart" beats at the bottom. The place runs overgrown with secrets, thicket upon unnavigable thicket like the one Robin's crawling through in that picture – nature, human or otherwise, can be enormously destructive when left unchecked.