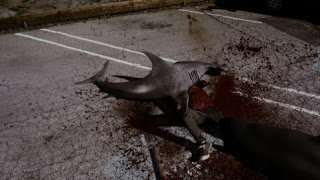 Sharknado, SyFy's newest media Hail Mary, premiered on Thursday to squarely average ratings and a deluge of Twitter lurkers desperate for attention. I've already touched on the caveats of intentional camp programming, and this soulless nonsense doesn't deserve many more words than that. Bad movies are typically funny if they're unexpected and unintentional; when you have studios like The Asylum churning out mirror-image screenplays differentiated only by beastie, the thrill of discovery is gone. All you're watching is a movie that has successfully managed to be bad, a workmanlike mimicry of incompetence that begs for ridicule at every turn. Laugh at the man cutting an airborne shark in half with a chainsaw! Mock the newscaster's awkward voice! Groan at "We're gonna need a bigger chopper," just to show your friends that you understand the reference! Sharknado and its ilk are films forged in pure cynicism, the antithesis of what makes a work of art into camp. 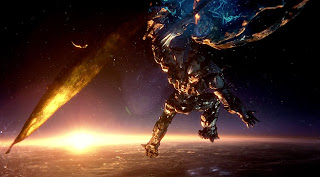 Meanwhile, fellow creature feature Pacific Rim took in only $38 million domestically this weekend. Its grosses will likely be satisfactory, but on a $190 million investment, "satisfactory" probably ain't what Warner Bros. is looking for...especially when they only have one active franchise to their name (The Hobbit). The film has been successful critically and received an A- CinemaScore, so one can only hope that word of mouth will bolster its weak box office. This is mostly because the movie deserves it but also because I want it to CRUSH Grown Ups 2. Pacific Rim is by no means perfect - the dialogue is bad, the pace and story setup are rushed to occasional unpleasantness, Charlie Hunnam is a nonstarter as hotblooded hero Raleigh Becket, and Guillermo del Toro seriously needs to work on directing and editing comic relief. But it's also got a great heart, supported by its optimism about human potential and unity, and the action is just beautiful. Comparisons to Transformers aren't totally inaccurate, especially when the marketing is working overtime to court its fans, but a director at the helm who understands the importance of color and space in action choreography makes a monumental difference. The fights here are far more than interchangeable metal husks running into each other at mach speed, in no small part because the characters have an active stake in the outcomes of these fights. If you prefer your action delivered entirely by 'bots while the useless meatsacks run through the streets and scream, then God be with you, but I'd sooner die.

So what is it about the monster movie, anyway? Names like Alien, Predator, and King Kong can still get asses in seats, but they have decades of celebrated history. The only original films in the genre to turn a profit in the last ten years are Super 8, Cloverfield, The Host, and, uh, Shark Night 3D. (Box Office Mojo's categorization would also place The Grey and The Descent in this bracket, but I'm not sure I'd call them "creature features.") That's it? About one successful monster action movie every two years? What happened to the Harryhausen hits, or the piles of mid-50s radiation freakout movies? I suppose no one wants to brave the dinosaur well when Jurassic Park has so absolutely cornered it; alligator movies are rarely satisfying; spiders are passe and sharks cartoonish. 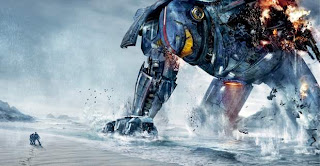 Perhaps there just isn't much of a role for the creature feature in contemporary cinema, short of as a site for derision and occasional blockbuster risk-taking. This is doubly unfortunate when you consider the role that this genre has traditionally played in the cinematic canon: directors and writers have long used inhuman threats allegorically to address the pervasive scientific anxieties of the time. Viewers can find it as early as 1910's Frankenstein, a treatise on pseudosciences like galvanism and the ethical quandaries present in playing God. Also significant are 1953's The War of the Worlds, a treatment of H.G. Wells' scientific revision of invasion literature, and 1954's atomic testing cautionary tales Them! and Godzilla. (The glut of films in the latter subdivision coming from post-bomb Japan is particularly difficult to ignore.) The prominence of creature films in this era can also be ascribed to a groundswell of interest in scientific education after World War II, just as the modern waning of the genre runs parallel to our strikingly low scientific literacy. With such precedents in mind, I don't think it's any coincidence that Sharknado and Pacific Rim both trace the origins of their respective monsters to climate change. Granted, their explanations are little more than throwaway lines, but these are still two of the most visible creature films of the last couple of years catalyzed by the most visible scientific concern of the last couple of years. Neither film benefits from paying too much lipservice to the issue, since both are continually hurrying to get to the good stuff; a more salient example might be last year's Beasts of the Southern Wild, which closely ties both its ravaging aurochs and its barely-restrained class warfare to global warming. It is difficult to say if the environmental message of Pacific Rim will make any sort of impression - it certainly won't come from Sharknado, and fifteen seconds of Charlie Day's whiny monologuing is far down the list of memorable qualities in del Toro's film. More mainstream consciousness of this continually ignored problem can't possibly be a bad thing, though, and the creature feature subgenre has proven itself a compelling polemic vessel for over a century. Take what you can get from your Hollywood megaproducts, I suppose, be that big stompy monsters or environmental responsibility.
Posted by Drew at 3:16 PM