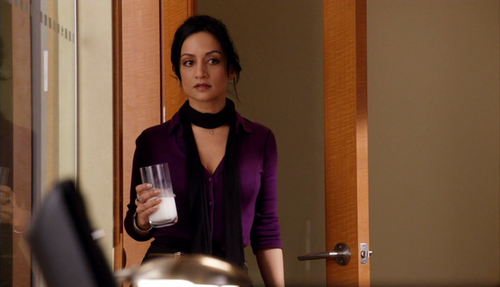 The Good Wife is a show about a lot of things, but it is mostly about how much adult life sucks and how much adults need alcohol to deal with adult life. What better way to celebrate this than to drink along with them? You can make like Kalinda and play with milk, but it sort of defeats the purpose and this show is more fun after throwing back a few anyway.

1) Any time someone drinks. Obviously!
2) Any time Alicia is a good wife.
3) Any time Alicia is not a good wife.
4) Any time someone begins a conversation with "I want you to work with me."
5) Any time someone ends a conversation with "Think about it." Take two extra drinks if this conversation began with "I want you to work with me."
6) Any time Kalinda says "I'm on it."
7) Any time a character uses the phrase "fishing expedition." Take an extra drink if it's a judge.
8) Any time a character uses VidTrope or VidLook. This will often be accompanied by an extra drink for rule 27.
9) Any time a character uses FaceBranch or ChumHum.
10) Any time a character buttons his suit jacket as he stands up.
11) Any time an actor who appeared on The Wire shows up.
12) Any time an actor who went on to appear in The Walking Dead shows up.
13) Take four drinks if an actor who appeared on both The Wire AND The Walking Dead shows up, then ponder this show's amazing eye for acting talent.
14) Take three drinks if an episode begins with a decontextualized image, followed by a cut to black, then another image, then black, then the rest of the episode.
15) Any time the dubbing is bad. (In any over-the-shoulder dialogue shot, watch the mouth of the character with their back to the camera. TV production values ahoy!)
16) Any time someone uses the word "cynic" or any derivative thereof.
17) Any time two Lockhart-Gardner lawyers object at the same time. Take an extra drink for each lawyer past the second.
18) Any time the prosecution and defense simultaneously attempt to talk over the other.
19) Any time "in your opinion?"
20) Any time Michael J. Fox launches into his tardive dyskinesia spiel and you start to feel a little weird because you don't know if the show is turning his Parkinson's into a convenient character trait/running joke or if he's totally cool with it???
21) Any time the show takes a passive-aggressive shot at premium cable.
22) Any time Diane says something in a foreign language.
23) Any time the show demonstrates a questionable understanding of digital fiat currencies or the sites used to exchange them (MtGoX, Silkroad).
24) Any time you can tell the writers desperately wanted to use the word "fuck" or any of its derivatives but were unable to.
25) Any time there's a partner's meeting of paramount importance that doesn't actually resolve or accomplish anything.
26) Any time Alicia is made out to be a racist and gets comically flustered over it.
27) Any time Dave Buckley busts out some cheesy-ass original music. Take an extra drink for seminal hip-hop cut Thicky Trick.
28) Any time you hear THIS song:


(Why did the uploader use a picture from a random anime? Who knows, but of course that's the one I'm going to pick.)
29) Any time you feel a burning sense of injustice that House of Cards is one of the most popular programs on the air and The Good Wife is relegated to the CBS senior ghetto.
30) Any time Elsbeth Tascioni waltzes in to wizard a character out of a seemingly insurmountable plot obstacle and then vanishes, presumably for the rest of the season.

Finish your drink...
31) Any time Will and Diane share a tender dance and your heart melts <3

32) Any time the show kills a major character.
33) Any time Cary uses Dana Lodge's relationship with Kalinda as a quasi-lesbian proxy fuck.
34) Any time Kalinda has a meaningful plotline after season 3.
Posted by Drew at 2:03 PM

Email ThisBlogThis!Share to TwitterShare to FacebookShare to Pinterest
Labels: Kalinda is the best, The Good Wife, TV